A moment at Bokaa shooting range 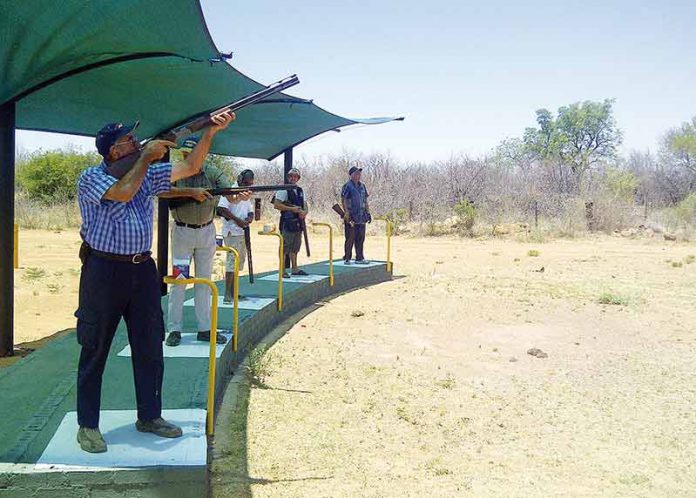 The Botswana Defence Force shooting range at Tlhage Valley situated behind Bokaa Hills in the Kgatleng District has turned in to a weekend playground for rifle and shooting enthusiasts.

Every weekend, particularly on Sunday afternoons, members of the Botswana shooting team converge at Bokaa shooting range to practice their shooting skills on flying clay pigeons.

Clay pigeon shooting is different from shooting stationary targets. It is rather a challenging sport that tests hand-to-eye co-ordination.

Unlike aiming for the bulls’ eye every time, it’s tricky in the sense that now you have to take down an air Bourne object. In simple terms, it’s like shooting a moving target.

Professional rifle sports men wear ear mugs because when the thunderous rumble of a rifle being fired goes off, it sounds like an erupting volcano.

However, regardless of ear protection, the bang gets less noisy as time passes on.

Watching closely in morbid fascination from the firing line, Les Porter, an ardent team member is without a shadow of doubt a natural marks man at clay pigeon shooting.

Every time before splitting a single clay pigeon in to pieces with his bullet, Les Porter, the owner of exquisite jewelers at Game City Mall, holds the rifle with one squinted eye.

It seems to take up all his concentration, and his entire field of vision. His thin lips hidden beneath his drooping, almost burlesque moustache forms a single word, “Fire!”

Though they aren’t trained soldiers, members of the Botswana shooting team are truly vey professional, sons of guns.

“Firstly, one needs to be over 21 years and have a shot gun rifle. If you don’t have a rifle then you can rent one from one of the members,” says Porter.

“Once you have a rifle you buy 25 shotgun bullets from us for P250 which are enough for 25 clay pigeons, and that is considered as one round.”

Les Porter is one of the most regular clay pigeon shooters at Bokaa shooting range.

Steve who is aware that this year there will be no hunting says, “In the meantime we’ll just have to make shift with shooting clay pigeons since there is no other option; its good practice either way.”
Rifle shooting is a sport for men. Killing is a result of shooting; therefore that’s the main reason why most women don’t want anything associated with guns.

Perhaps this is why there are only a handful of women who join the defence force after graduating from university.

Meanwhile, anyone looking for an extreme outdoor activity, Bokaa shooting range is the place to be during weekends.

Coolers and camp chairs are allowed, and please, no littering!