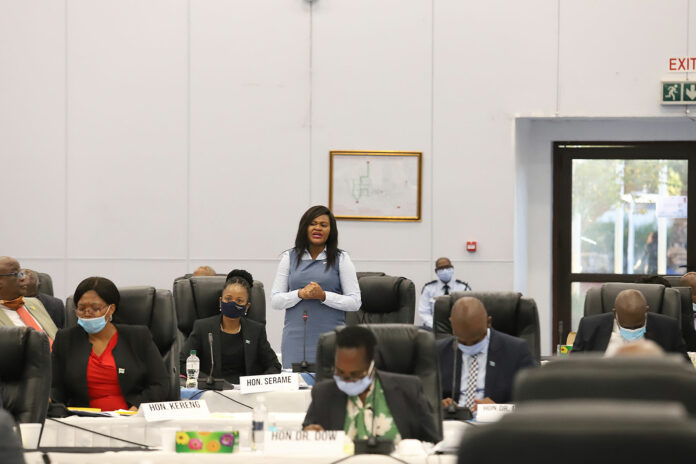 Part of the suggestions that has been made to have the arable farming sub-sector maturing into a significant contributor in the agriculture sector is the assistance of farmers to drill boreholes in their farms for irrigation.

This suggestion was made on Friday by Member of Parliament for Francistown South Wynter Mmolotsi through a parliamentary motion.

The motion however got thrown out of the parliament window as ruling Botswana Democratic Party (BDP) Members of Parliament (MPs) led by junior minister at the Agriculture Ministry – Beauty Manake cast their votes against it.

In response to Mmolotsi’s motion, Manake said that the government has been pondering on introducing a similar initiative but the stumbling block remains finances.

“This is an interesting motion but the proponent of the motion failed to take time to understand how best this issue can be addressed taking into consideration the cost that comes with it,” said Manake.

She also stated that the drilling of boreholes would cost government over 7 billion pula annually.

“The proponent of the motion should also understand that Batswana does not have the funds to contribute in this, so that will be difficult for them as well,” said Manake.

When presenting the motion, Mmolotsi stated that the intention of the move was to help reduce the country’s high food import bill which currently stands at over P800 million.

“This was a good motion which had the best interest of Batswana at heart because this could have addressed the high spending of government on programs such as LIMID which hardly produce the intended results due to the availability of water in farms,” said Mmolotsi.

Mmolotsi further expressed disappointment on Manake for failing to endorse the motion.

“I am quite shocked that the Acting Minister whom I understand is also a farmer failed to endorse the motion even though she knows very well that farmers fail to produce because of unavailability of water in their lands.”

The Alliance for Progressives (AP) MP said that in the past the country saw the government spending a lot of money fencing lands and ploughing for Batswana free of charge without taking into consideration that these farmers also need boreholes to ensure that they are able to reap the desired results.

“The minister indicated that this exercise will come costly for government but she should know that we need to be pragmatic, she should also understand that there is nothing that will come cheaply in the development of human being,” added Mmolotsi.

Mmolotsi said the country’s rainfall is unreliable and erratic thus making it difficult for Batswana to know when to plough.

“Helping farmers with boreholes was also bound to assist farmers to plough stock feed such as lab lab and other palatable species. Government has on many times spoken about food security and that showed there was desire that is why government came up with programs such as LIMID, ISPAAD and you can see that the only gap that has been eluding government is the drilling of boreholes for Batswana,” said Mmolotsi.

Meanwhile Manake further told Parliament that in the upcoming ploughing season of 2022-2023, government will introduce a new program called Agro economical zones which will seek to develop farming.

“The new program will seek to assess the feasibility of ploughing in different areas looking at the issues of climatic conditions, the environment, pests and soil condition so that where there is underground water, perhaps government can assist to ensure there is irrigation,” added Manake.