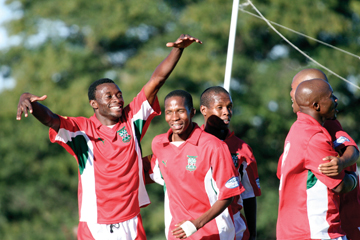 As the first round of the Mascom Premier League came to an end, many people had already put their weight behind Francistown based side, Ecco City Green and Mochudi Centre Chiefs. Both teams were seen as hot favourites to win the league because they registered victories in almost every game they played. But when the second round commenced, it was not void of surprises. Both Ecco City Green and Chiefs had their wheels loosened as they started to drop points. BDF XI closely watched the proceedings and took advantage of that. The team is now emerging as strong contenders for the league championships. Even though BDF XI are still trailing Ecco City, which currently leads the log, they are on an upward swing that might work for them by the end of the season. ‘Matebele a mantsho,’ as BDF XI is fondly called by its supporters, have reduced the huge gap between themselves and both Chiefs and Ecco. And any mistake the two teams commit, might lead to BDF XI taking the leadership of the log.

To the surprise of many, Ecco lost two successive games and by huge margins. They conceded six goals to both Township Rollers and Uniao Flamengo Santos without responding. Onalethata Thekiso scored for Rollers, while Thato Siska netted for Santos.

What is even making BDF strong challengers is that they play some of their games without their top marks men. For instance, when they won against Prisons XI last weekend at Sir Seretse Khama Barracks, they were missing the services of three of their influential players who were rested to pave the way for youngsters and new signings. Keikothaye Botlhoko, Nelson Gabolwelwe and Kenny Ramodisa’s absence was not evident. Even top striker Mpho Mabogo started from the bench.
Team coach, Stanley Tshosane, has since made it clear that his intention this season is to win the league. He told Sunday Standard Sports that, BDF XI have what it takes to win the league.

“The way things stand currently, we stand a chance of winning the league. Those teams that started on a high note are falling while BDF XI is rising. Our current performance is something I planned just before the beginning of the season and it is paying dividends now. As you might have seen in our game against Prisons we missed several key players and their replacements played quite well. The players that were not in the game are not injured, but I wanted to give others a chance and they did not disappoint,” Tshosane said.

Tshosane also added that BDF XI are rising because when the league started he engaged his team in a programme that does not impact negatively on physical fitness of the players, especially at the stage when the competition is reaching a boiling point.

The main worry for the BDF XI mentor, however, is injuries. He said injuries are a problem but emphasised that he will do his best to avoid injuries to his players.

Ecco City, on the other hand, seems to be losing games due to a lack of depth and over reliance on certain players. For instance, they missed three of their players in some of the games they lost. Their anchorman, Gaboratanelwe Kgosietsile, is injured while hard tackling defender, Zecco Makafiri, was serving suspension. Front man, Tebogo Sembowa, was in camp with the under 23. The trio’s absence exposed the team and their replacements failed to hold the fort.

Meanwhile, Chiefs missed some of their key players in their loss against lowly placed Comets yet they have a huge squad that can even make three teams.
In the late 90s, BDF XI used to dominate local soccer, winning almost everything on offer.

Sometimes they even doubled up by winning the lucrative Coca-Cola cup. They also made their presence felt in the African competitions. They were the first local side to defeat an Angolan team, FC Sonangol. After defeating Sonangol. they nearly made history again as they narrowly missed defeating a strong team from the Democratic Republic of Congo (DRC). They won by a goal in Gaborone and lost by two goals in Lubumbashi. What was painful for BDF was that the DRC side, FC Lupopo, scored the deciding goal in the dying minutes of the game.

However, for the past two years BDF XI was mainly dangling in the middle of the league. The signing of quality striker, Bernard Simakwenzi, has added spark in the striking department. His combination with Mabogo is one of the deadliest in the country.