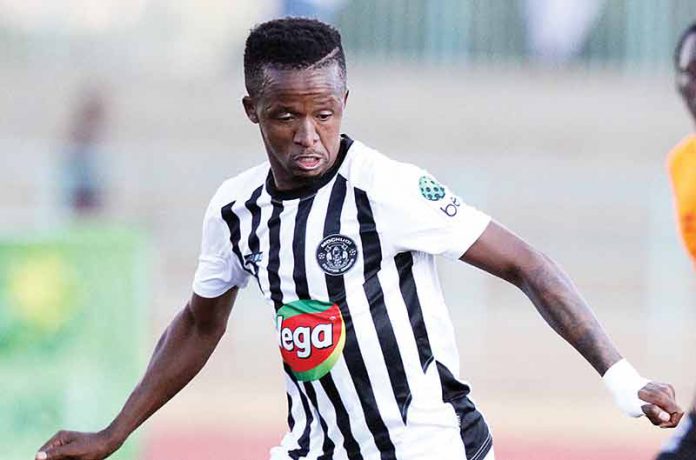 “It was great to score such a spectacular goal because we needed it most to stamp our authority in the game.

The unfortunate part is that the media has taken the credit away from me and blamed the goalkeeper (Mosimanegape Robert) for making the mess out of the situation.┬á But that does not worry me much because what is important is that the goal managed to help us collect maximum points. The team comes first and personal glory comes last,” said Moloi on Friday morning.┬á It was Moloi’s sixth goal of the season.

While Chiefs played the game under a dark cloud following Orapa United’s protest over Moloi’s eligibility, the Chiefs’ skipper said they are not going to let off-the-field issues affect them. “We’re focused on winning our games and we’re not going to dwell much on the administration issues. Honestly, I’m a seasoned player and i don’t allow negative stuff to get to my head. That is why I continue to perform every weekend for my team,” he continued.

When the season kicked off in August last year, nobody gave Chiefs a chance to compete for the championship considering the number of key players they have lost during the winter transfer break. “We knew it was not going to be easy because there were new players coming into our squad. After a sloppy start, we managed to regroup and started winning our games. I’m aware people were scrutinising our defence but we knew how to complement them. We work as a team hence we’re top of the log. At this point in time we’re focused on winning the League,” Moloi said.

Moloi’s magic feet used to cause havoc when he played for Notwane almost a decade ago. It was for this reason that Chiefs signed him in 2006, a move which took many in the football community by surprise.

Since joining the Kgatleng giants, Piro, as he affectionately known has been a source of inspiration with his silky skills and his ability to score crucial goals. While in the last three years his legs have slowed down a bit, it is his experience and leaders which are benefiting Chiefs a lot. Those in the know have credited Moloi and Onalethata Tshekiso for creating an unbelievable camp at Magosi.┬á“There are lots of young guys in our team and it is up to the experienced guys to lead. I’m happy that we’ve played our role and the youngsters have also come to the party. It is at this stage when we need to be united,” he said.

Though he will be 31 in November, Moloi has pointed out that he has not considered retiring from the beautiful game. He believes that he still has few years in his feet to help Magosi. “I know some people think I’m old and it is time to call it quits. I love this game and I’m passionate about it. I believe my legs can still carry me because every morning I look forward to training. I’ll only quit when I feel that my body is not responding,” he said.