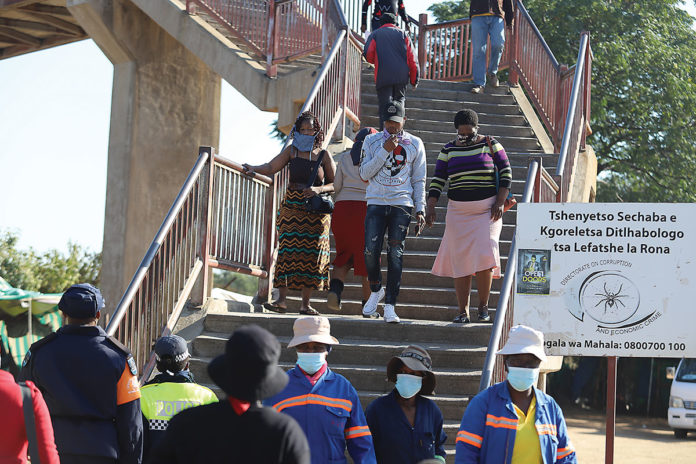 Setswana doesn’t distinguish between “lend” and “borrow”, contenting itself with “adima” for both. This explains why a lot of mother-tongue interference occurs when some Setswana speakers have to express these ideas in English: “Please borrow me money.” Likewise, where Setswana differentiates between “apara” and “rwala”, English has only word to describe both – “wear.”

It probably shouldn’t be that big a deal that the Coronavirus Taskforce has been using “apara” and “rwala” interchangeably but it is because those words don’t mean the same thing. And, at a time that state media (notably Btv) has put Setswana on a pedestal, it is seems opportune to investigate which word should be used in public health messaging to refer to wearing a mask.

Norman Gadilatolwe, a Setswana lecturer at the Serowe College of Education, prefers “apara” over “rwala.” The case he presents is that “rwala” is used for articles of clothing that you wear on the crown of the head, on hands and feet as well as for jewellery like rings and watches. Conversely, a mask is worn over the face. The other very important point that Gadilatolwe makes is that the rwala-type of wearing involves inserting a part of the body into a garment – such as when you insert a head into a hat, feet into shoes and hands into gloves. A mask is spread out over the face – the face is not inserted into it. So, does that mean that “rwala” can be used for trousers because you insert legs into them?

There is this as well: what you “rwala” you “rola” and what you “apara” you “apola” – both new words mean to take off. Are people likelier to say they “apola” than “rola” a mask when they take it off?

Guess who else agrees with the view expressed by Gadilatolwe: the lexicographer of the 1895 edition of the Setswana-English dictionary which was printed for the London Missionary Society. This dictionary defines “rwala” as “to put something on the head or feet” and “apara” as to put on upper garments.” The explanation for the latter is that trousers, whose origin has been traced to the Mongolia of Genghis Khan, are not part of traditional attire for Batswana men. To answer that pending question, there were no trousers when Batswana started using “rwala” but through a semantic quirk – standard feature in any language – “apara” has become the accepted word.

On the other hand, Kellen Seretse, a Setswana author whose latest book is titled Setswana Sotlhe, leans heavily towards “rwala.” While he agrees that “rwala” being used for what is worn on the head, feet and hands, he hastens to add that a face mask is worn on the face – which is part of the head.

Is all this semantic hair-splitting necessary? Yes, because language (any language) is not a haphazard occurrence of words but a rule-governed system.  If “apara” and “rwala” meant the same thing, Setswana would have adopted one at the exclusion of the other and there would be no confusion as to their meanings. Besides, there is aesthetic need to maintain purity in language which, beyond its practical communicative purpose and across time, space and cultures, is widely recognised as an art form.

At a time that Botswana is fighting an incurable disease, it is also important to communicate public health messages in a clear, unambiguous manner. That is not happening which is why “rwala” and “apara” are being used interchangeably and why you are still getting SMS alerts like “Bodiphatsa wa go tsenwa ke COVID–19 bo santse bo le teng, itlhokomele – no full stop. While grammatically correct, the latter sentence is unusually structured and reflects formal correspondence between surface structures functioning in the source language (English) and the target language. At our request, Seretse revised it to “Bolwetse jwa COVID-19 bo santse bo le diphatsa thata. Itlhokomele!”