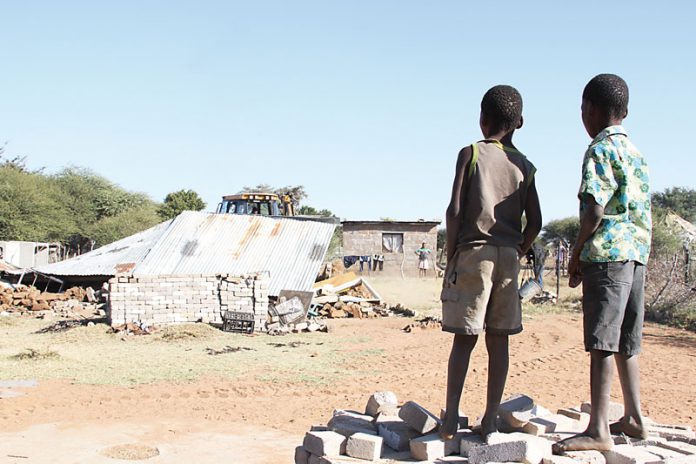 About six families were left in the cold after the Kgatleng Land Board demolished several houses belonging to squatters at Mamashia, which is located just a few kilometres from Gaborone.

The households, each with roughly four adults and about five children, were left stranded on Friday following the demolishing.

According to the Land Board, the families had long been told to relocate but claimed they were not squatters.

The Public Relations Officer of Kgatleng Land Board, Dominic Shaba, told the Sunday Standard in an interview that around the year 2000, investigations were carried out and they revealed that there was a number of people in Mamashia who had allocated themselves residential plots.

Shaba said they had demolished about six houses and more were expected to be demolished pending the outcome of the investigations.

“It is very painful to see houses being demolished but people should also understand that illegal allocation of plots is not allowed,” he said.

“It is unfortunate that we have not made any arrangement for those whose houses were demolished although it is not our responsibility,” he added.

Shaba, however, said that as, Land Board, they are very worried about the increasing number of squatters in Kgatleng and promised that the Land Board will deal with those who squat.

Shaba also revealed that the Land Board will tear down several other illegal structures in other Kgatleng district settlements, such as at Raserura and Malotwana.

“Once the investigations confirm that they are squatters, they will be asked to move no matter what kind of structures they have developed,” he stated.

Shaba has appealed to members of the public to desist from illegal allocation. He warned that irrespective of how much the structure costs, the houses built on illegally obtained land will be demolished.

The civic political leadership has not taken kindly to the demolishing.

The Chairman of the Kgatleng District Council, Tona Mooketsi, has described Kgatleng Land Board as ‘barbaric and heartless’.

In a separate interview, Mooketsi said that it is shocking and disgraceful that most of the local authorities in Kgatleng are not aware of this demolition.

Mooketsi said that the Kgatleng Land Board is ‘big headed’ and “has very poor relations with the Council because of the bad attitude they have”.

He pointed out that on several occasions the Council had tried to call meetings with the Land Board but the latter has been reluctant to attend any meeting with us.

Mooketsi said the Council has sent social workers to Mamashia to see how those evicted can be assisted, especially the children, the sick and the old.

He said it is crucial that a special council meeting be called to discuss the disturbing issue of demolition.

The area councilor, Gerald Bodika, said the demolition is politically driven while on the other hand the council is considering calling a special council meeting to discuss the demolition matter.
“I have tried to plead with the land board not to demolish the structures but they stated that they were acting on a court order,” said Bodika. “I strongly believe that this demolition is politically motivated more so that I am from the opposition party.”

He charged that “if it was not politically motivated, the exercise could have taken place during the reign of the Botswana Democratic Party councilors”.

“What surprised most is the fact that Mamashia had a polling station, which means that the area was recognized during elections,” he argued.

The Ministry of Health (MoH) last week signed a service level agreement with the Public Procurement and Asset Disposal Board, aimed at ensuring upholding...
Read more
118