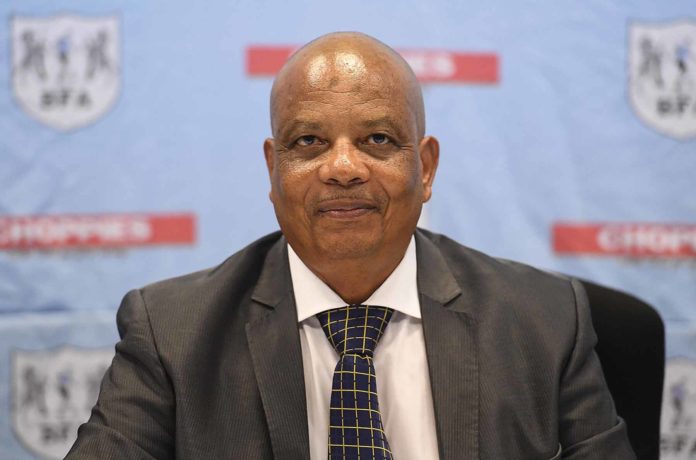 ‘Why get back to the RED if you can stay CLEAN with Maclean?’ so reads a campaign slogan from incumbent BFA president Maclean Letshwiti.

The slogan is a direct jibe at Letshiwiti’s predecessor and now also his opponent at the upcoming association elections, Tebogo Sebego.

When Letshwiti took over the BFA presidency, the association was allegedly knee deep in debt.

And as the buck stops with the leader, all fingers point to Sebego for allegedly overseeing a reign of ‘financial mess at the BFA.’

Now as the issue crops up again as one of the key campaign issues, the question is, ‘how did the Sebego led BFA end up in the red?

When it comes to matters relating to the Botswana Football Association (BFA), however, separating myths from facts is often an exercise in futility.

Four years ago, in 2016 at the BFA elective General Assembly (GA), the association posted a record deficit for the first time.

For Letshwiti, voted in during the 2016 elective assembly, the reported deficit and recovery was to be a stick with which to whip his predecessors.

‘They had left the association in a financial mess which he had to clean,’ he would fire back when tongue lashing his predecessor.

Now as the association prepare to head for another elective assembly, the issue of the BFA finances is becoming one of the most contentious and controversial.

Of recent, Letshwiti’s predecessor Tebogo Sebego is hitting back at the suggestion that he left the association in dire financial situation.

According to Sebego, who along with Ookeditse Malesu will challenge the incumbent for presidency, when he left the association, ‘it was in good financial state.’

“It was only in 2016 when the current 1st vice president recommended that we make a comprehensive and consolidated audit of all BFA structures that we then had a deficit,” he says.

According to Sebego, most of the debt which he allegedly left at the BFA was accumulated by the Botswana Premier League (BPL).

But was the BFA ever so deep in debt? How was the recovery done?  In an interview with this publication this past year, Motlogelwa, who is the man behind the numbers, alluded that getting the association back on the positive was no easy task.

He says they put in place strategies to mitigate the association’s then critical financial situation.

“Among our strategies, we put in place cost containment measures, prudent financial management systems as well as putting in place measures to pay the association debtors,” he explains.

Sebego however contends that while all the debts of the association were included in the consolidated audited financials, not all of them needed to be paid and were not paid.

“When some of the debtors came out when I was the leader of the association, we decided to contest the debts. As a result, we won the litigations and the debts naturally fell off, never to be paid,” he contests.

He says this therefore meant the deficit decreased without the association having to pay them as they had been added in the consolidated audited financial report.

Sebego’s assertions on the BPL being the major cause of the deficit also echoes the explanation given by Motlogelwa a year ago.

Speaking in an interview at the time, Motlogelwa explained that ‘at the top of the concerns are the taxes owed to the Botswana Unified Revenue Services (BURS), most of which are related to the Botswana Premier League (BPL).’

He says in the past, the BPL was registered as an independent entity which was liable to pay taxes despite being a structure of the BFA. This however allegedly never happened as the BPL never paid taxes and the BFA now had to take over the debt.

By the time the BFA made its consolidated audited financials, the debt to the taxman had accumulated over the years and attracted penalties and interests to stand at P5 million.

Aside from tax related debts, the BPL had also accrued other debts, among these monies owed to the BNSC for the use of stadiums.