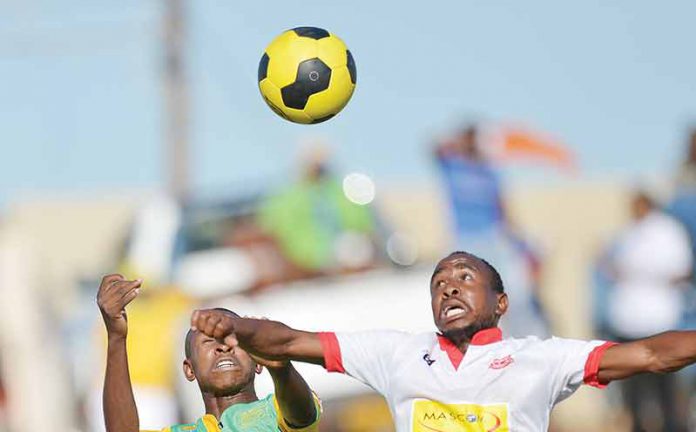 Relegation threatened Nico United put up a monumental fight against Mochudi Centre Chiefs in a beMOBILE Premier League match played at Molepolole Sports Stadium last Friday night. However, in the end, it was a bridge too far for Majombolo as they went down 2-1. A late goal from substitute Galabgwe Moyana handed Majombolo their 11th defeat of the season.

As their players walked out of the pitch with their heads down, it was clear that Nico United are in deep trouble. However, despite the poor results, there is a belief within their camp that come end of the season, Majombolo would retain their Premier League status. Sunday Standard journalist TSHEPO MOLWANE reports.

As the season draws close to the end, many who have a high regard for Majombolo know that their club needs to turn around the results otherwise the dreaded axe would come hard on them. Against Chiefs in Molepolole, Nico United outperformed themselves and one would not have believed that they languishing at the bottom of table.

With Premier League clubs enjoying international break this weekend, Nico United head coach Wesley Mondo told this publication that the break has come at a right time. After the loss to Chiefs, he complained that his side was fatigued following a busy League and Cup engagements. “The boys badly needed this break and I’m confident that by the time we play our next game (against Township Rollers on Wednesday night in Selebi-Phikwe) they would have recharged their batteries. I believe that our fans would see a different side in the coming games,” said Mondo.

The well-built tactician added that his side has been playing fantastic football but they have been unfortunate with the results. He pointed out that they have been working on converting in training and the game against Rollers would be a test. “Rollers are a big side but they come at a time when we need points badly. If we minimise our mistakes at the back then I’ve no doubt that things will fall in place,” Mondo said.

Nico United defender Kagiso Tutuwe revealed that they held a meeting in the past week to address the situation. He has no doubt that after the ‘pep talk’ they would start accumulating points. “We had few issues which were distracting us but the management has assured us that they’ll be addressed. We’ve set ourselves a target as players that we need to win four of the seven games remaining then we’ll be safe. Qualifying for Top 8 is out of reach so we need to consolidate our position in the League. Then the rest will follow next season,” said Tutuwe.

The club’s chairman Mothusi Taolo hinted that there are few issues that they need to sort out internally before their game against Rollers but he could not be drawn into discussing the matter further. “All I can tell you is that the boys are determined to keep the team in the elite league. We’ve been playing well but the goals have been eluding us but I’m confident that things will change soon. We just need to win a game and things will change for the better,” said Taolo.

Majombolo further revealed that he had a meeting with other stakeholders in Gaborone who are willing to assist in getting the club out of the relegation mess. “It is not nice to be where we’re but I must say that with the effort of everyone we’ll overcome the situation. I want to urge our supporters not to despair and continue rallying behind us like they’ve been doing. I want to applaud our supporters because our situation has brought us together,” he said.

On Wednesday night, in the copper-nickel mining town, Nico United play host to league chasers Township Rollers in a match which is seen as a six-pointer to both sides. Rollers have experienced mixed fortunes in recent times and a loss in Phikwe would further tarnish their chances of defending their title. Kick off is at 7pm.