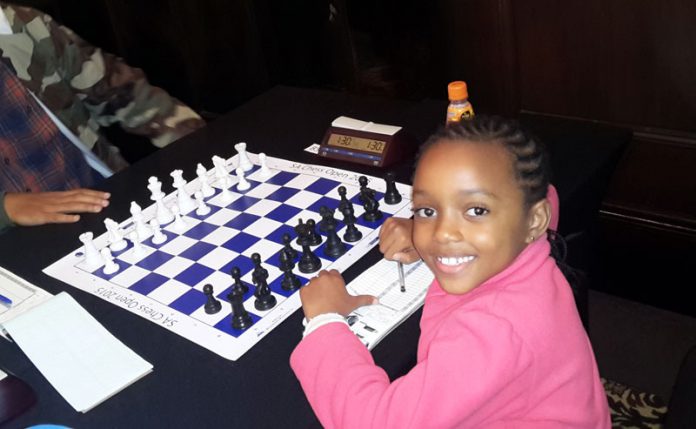 Chess Women Candidate Master (WCM) Naledi Marape, set for the big stage, harbours ambitions to be part of the national team next year.

Marape’s upward trajectory within chess ranks was visible at the recent Airfficiency Chess Championships held at the University of Botswana when the 10-year-old played alongside champion Women International Master (WIM) Onkemetse Francis in the women’s category.

The celebrated chess youngster emerged among the top 10 at the event despite playing against the best. She brushed aside the likes of Palesa Khumo and Women International Master (WIM) Tshepiso Lopang.

The development that witnessed Marape playing alongside mature players is reported to be strategies by coaches to sharpen her up for the national side provided she maintain standard of growth in the game.

Marape has proved in her category to be untouchable in the local scenes and achieved regional accolades. Her coach, Dr Marape Marape, told Sunday Standard that they had a vision to don national colours in the near future. He said Naledi was capable of representing the country if she is focused.

‘’We realised that the young Naledi has over the years proved to be strong for her age category and so it fit to elevate her to compete with stronger opponents in the senior category. Our aim is for her to eventually break into the senior national team. She has also grown tactically and mentally as she understand that losing some matches is part of learning.

“It will only be selected championships that will witness her competing with the juniors as we want her to learn fast and understand the game better by playing with experienced players,” said Dr Marape.

He said that it was visible that Naledi’s game had tremendously sharpened up after proving her mettle against established players. “It was astonishing to witness Marape giving experienced players a tough time in matches played last weekend at the championships. It shows that with the level of growth in her game there is a lot to be desired,” Dr Marape said.

For her part, BCF spokesperson Keenese Katisenge said that their development structures proved to be bearing fruit as witnessed with Naledi playing exceptionally well against more experienced players.

“Finishing in the top 10 ahead of senior and experienced players such as Khumo and Lopang demonstrates maturity in the level of Naledi’s play. We consider her and many upcoming youth the face of Botswana Chess Federation development. She has achieved what many could only dream of at her age. Gaining a FIDE rating, FIDE title and winning international medals,” narrated Katisenge.