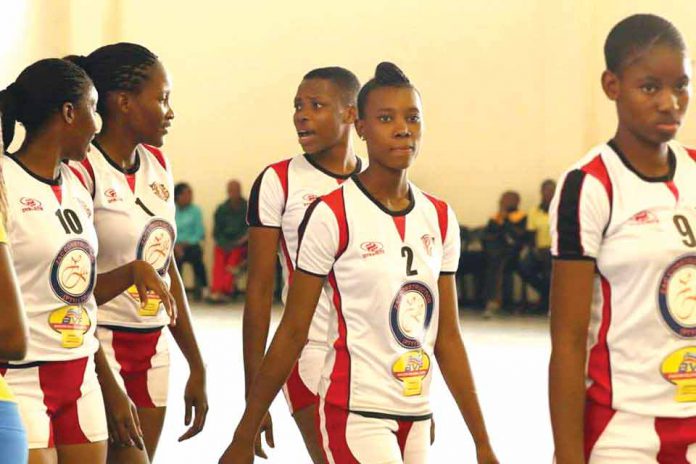 The Country’s most youthful and talented side, Dynamites Volleyball Club continued their impressive run in the ongoing Mascom Volleyball League on Sunday staged at the Botswana University of Agriculture and Natural Resources (BUAN).

Despite losing 3-1 to on form Kalavango in their first game, Dynamites mounted a strong comeback in their second match of the day to rout BDF IV with three straight sets (3-0) in a thrilling encounter that left the crowds shocked as they had been tagged the underdogs.

Following their loss to Kalavango Dynamites employed a different tactical approach against the “army girls,” with the duo of Jestinah Moyo and Maipelo Othusitse spearheading the team’s attack to fire them to the much needed victory.

Dynamites head coach Joe-Brown Tlhaselo said despite losing the first game he is happy with the overall performance of his team citing absolute determination and fighting spirit displayed by his girls.

“We came into the first game with a different tactical approach which I had hoped would win us the match. Unfortunately my girls did not adapt to the game plan which saw us lose the first game. We had to adjust our plan in the second game and I am happy because we made a strong comeback and managed to beat one of the powerhouses in volleyball,” he said.

He further stated that despite winning their second game they still have a lot to improve on if they are to finish the league in a better position.

“My team is dominated by young and naive individuals who are still learning and not yet comfortable to play under different circumstances and pressure. I am working around the clock to prepare them for such games both psychologically and physically. Today we missed the services of one of our established players, Gilian Odirile, who is based in Orapa. She is the one who usually guides and motivates younger players in games and it works for us, but this time around you could pick that we were lacking somewhere,” he explained.

Coach Tlhaselo however noted that his team lacks just one experienced player who is familiar with the elite league structures to inspire his youthful squad.

“Even though my team is known as base for development, experience is essential because we want to finish in a better position in the league. Our main aim is to make ourselves a name in the volleyball fraternity, a team that will be feared in future, a team that will produce best players who can represent the country at national level and slowly but surely we are getting there,” he added.

“We still need to improve our play and we now know where to improve. We are going to try hard to make sure that we don’t lose games that seem to be simple for us and that we rather struggle when facing tough teams like Kutlwano and Mafolofolo.”

Meanwhile Kalavango fought back from two sets down to defeat BDF VI (3-2) to pile more pressure on the army girls who lost all of their week 7 fixtures staged this past weekend.

In Serowe Kutlwano and Mafolofolo continued their dominance in the league after collecting effortless points over Mag Stimela and the newly formed Selibe Phikwe Volleyball club.