Ngami residents up in arms against controversial Kuke buffer zone 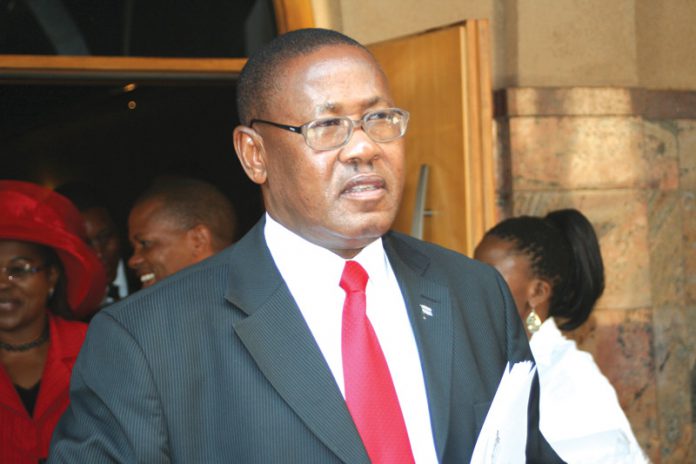 Members of Ntlo ya Dikgosi, representing the north- western diostrict have come out strongly against government’s decision to erect a buffer zone in the areas in the proximity of Kuke settlement.

Dikgosi are arguing the move was unilateral and undermines the inhabitants of the area.
Visiting Ngamiland recently, vice president Mompati Merafhe rubbed the residents of Kuke the wrong way when he informed them of government’s decision to construct a buffer zone in the region.
The Vice President said Government aimed at combating the foot and mouth disease that is tormenting the area.

Besides, the buffer zone would also be used for game farming, with individuals permitted to rear wildlife for commercial purposes.

The move has angered the residents, who are adamant it is the government’s intention to remove them from their communal farming lands to pave the way for game farming, which is predominantly the venture of a few privileged Batswana and their white counterparts.

Moving the motion last week Friday, which requested the government to review its stance, an agitated Kgosi Ebineng Potsoeng of Ngamiland denounced the government’s rigid decision, insisting they were not consulted over the issue and accusing the government of displaying an arrogant composure to the extent of maintaining it would persist with the construction whether “we like it or not.”

“This House should know that we were moved to these areas a long time ago by this same government, arguing then that we had to pave the way for developments in the Maun areas. We have now developed and invested much into these areas with boreholes a common feature in the majority of our farms,” said a dismayed Potsoeng, adding “despite these the government takes the issue lightly”.

“We were not initially consulted over the issue only for the government to come to us and inform us of this development. We want thorough discussion over this issue, particularly that the government also mentioned in the same vein the same portion would be used for game farming,” he argued, saying such a move was received with suspicion by the residents who are convinced “it is the government’s intention to remove us from our communal farms under the guise of combating the foot and mouth disease”.

“This area is not buffalo infested and we are puzzled how the government reached such a decision. We depend on livestock for livelihood and to deprive us of this fertile land would be too disastrous,” he argued, insisting monetary compensations alone were not enough as they get exhausted in a short time.

“We have in the past witnessed this similar situation, the government splashing money as compensation for relocation, which never took us anywhere, leaving us more impoverished,” he thundered.

Instead of constructing the buffer zone at Kuke and disturbing the farming activity in the area, Kgosi Kea Lempadi of Okavango, in supporting the motion for his part, insisted the government should enlarge and enhance the buffalo fence in the northern part of Ngamiland, which is infested with foot and mouth carrying animals.

“We are already squeezed because of the wildlife and to erect another buffer zone would be a bitter pill to swallow. We urge the government to refrain from this stance,” Lempadi insisted.

While it has become evident the government is unstoppable over this issue, the residents are living in fear of a bleak future as the government has not yet identified their new relocation.

“While it is clear about the government blatant intention, we pray with them to treat this matter as they handled the Baherero issue who voluntarily wanted to be evacuated to their ancestral lands in Namibia. We would want satisfactory boreholes dug, fertile lands provided and it should be the responsibility of the government to transport us,” Potsoeng declared resignedly.

Kgosi Mmualefhe of Chobe cautioned the government to tread with caution, arguing some relocation lands could portray some semblance of fertility while in actual fact they are infested with animal killing plants such as mogau.

“We do not experiment with such calamities. I urge the government in taking this decision to conduct a feasibility study to avoid disastrous situations which may follow,” he concluded.