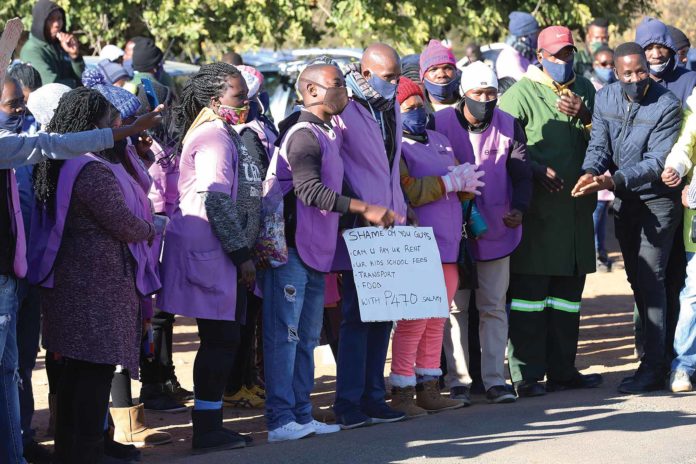 As Botswana’s unemployment roll continues to grow, recent labour data has shed some light on the country’s working class, revealing that majority of workers are untrained, hold low level jobs, while over 70 percent of the country’s workers earn less than P10,000.

According to Statistics Botswana’s labour data for the first quarter of 2020, the country’s population of people above 15 years is 1.6 million. Nearly 60 percent of this comprises of the labour force, defined as any person above the age of 15 years and is able to work. With a labour force estimated at 978,396, only about 76.8 percent or 751,798 are employed. The unemployment rate is 23.1 percent, representing the 226,598 people without work. The unemployment rate is even higher when you add the discouraged job seekers, bringing the number of jobless people to 285,813 or 27.5 percent of the labour force that is not employed.

Even those employed are not fairing better, as majority are found in low paying jobs and in sectors that are adding jobs at a lower pace, and sometimes working without job security. About 492,915 workers are in formal sector employment, accounting for 65.5 percent of the 751,798 workers. Formal sector employment is defined as jobs from companies registered to pay tax, employing five or more personnel and does not operate from households.

More than half of the 751,798 workers are holding jobs in vulnerable occupations such as service or sales roles, and many in elementary occupations – defined by the  International Labour Organisation (ILO) as work consisting of simple and routine tasks, mostly used loosely to refer to labourers. According to Statistics Botswana’s data, about 61 percent of workers do not have any formal training, partly explaining a larger portion of workers in elementary occupations.

Professionals in the formal sector, mostly with university degree, can expect to earn P14,714, while technicians and associate professionals are said to earn P11,312 and managers tend to earn P8,638. The figures pale in comparison to majority of workers in the elementary occupations, whose average pay is P1,289.

Of the 492,915 workers in the formal sector, only about 78 percent are truly said to be in formal employment, which refers to jobs with better security and benefits. This is employment that is liable for taxation, pension or gratuity. The workers also get paid or maternity leave, allowances and medical services. The employers are bound by contract agreements, which offer employees protection through instruments such as Labour Act or regulations like minimum wage. The workers are also paid overtime.

Most of the employees in formal employment (40.2 percent) who were earning P2,000 to P4,000, were working as service or sales roles. Elementary occupation workers accounted for 40.6 percent of employees earning in the range P1, 000 to P2, 000. The group of employees who were earning between P10,000 and P30,000, 39.6 percent of them were technicians, followed by professionals at 30.2 percent within the group.