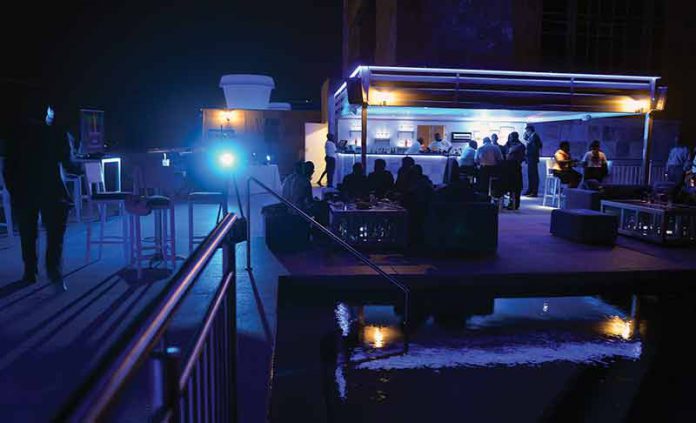 Say Absolut Gaborone and most people would immediately think of women seating behind pretty pink drinks with umbrellas, fruit, straws served in even prettier cocktail glasses of all shapes and a size ÔÇô but of course they will be wrong.

The new up market joint up the Lansmore Masa complex is at the receiving end of angry customers who are using the social net work to demand better service. What started as a grievance by a customer on a Facebook page suitably named “Name and Shame them,” evolved into a two day long exchange of blows followed by apologies, explanations and further scrutiny between customers and the Lansmore staff.

At first the complaint seemed like a storm in a plastic tumbler and would have probably gone unnoticed had their resident Dj who goes by the names Devon Tyler Workman kept his cool and left management to address the complaints. The complaint centered on the fact that the new chic bar served their beverages in plastic tumblers.

Dirt hit the fan when Workman stated that people who request to be served on beer and cocktail glasses usually knocked them over. He said Absolut Gaborone could do without the customers and went on to cite that their competitors, The Gaborone Sun was notorious for ‘hookers’ and they catered for a classy crowd. Commentators came down on him like a ton of bricks some citing the medical ramifications of using plastic to serve alcohol. This tirade went on for a while and spread across the social network faster than veld fire.

The subject also attracted the eye of Richard Harriman from Business and Enterprise Solutions Botswana who also administrates the ‘Consumer Watchdog’ page. In his opinion, “Consumers have a right to complain when they feel either mistreated, or just poorly treated. If they don’t get a satisfactory response they have a right to escalate the problem through the layers of management to the very top.”

Workman later issued a statement apologizing for his earlier remarks which was viewed by many as flimsy and according to Harriman, “He (Workman) was apologizing because he’d been forced to. Most notably he didn’t apologize to the management or the patrons of the Gaborone Sun Hotel who he had grossly insulted. Nor did he apologize to the patrons of the Absolut Bar who had raised some valid questions.”

Rupert Elliott, the General Manager Lansmore Masa Square however came to the rescue and issued a formal statement distancing themselves from the remarks made by Workman. In the statement Elliot indicated that, “Devon is a contractor hired in his professional capacity as a DJ and does not serve in a managerial role or as spokesperson of any form. The comments he made on Facebook were hugely misguided; they were also wrong.” Regarding the plastic tumblers, Elliot explained that it was an issue of safety around the pool area. In a phone conversation later, Elliot hinted that they were in the process of acquiring better looking glasses than the one they were using though they will not be using glass in the pool area.

Social media proved to be a powerful tool of communication in this instance and many others and should therefore not go unnoticed since it can either make or break an entire organisation.