An uphill battle for the Reds 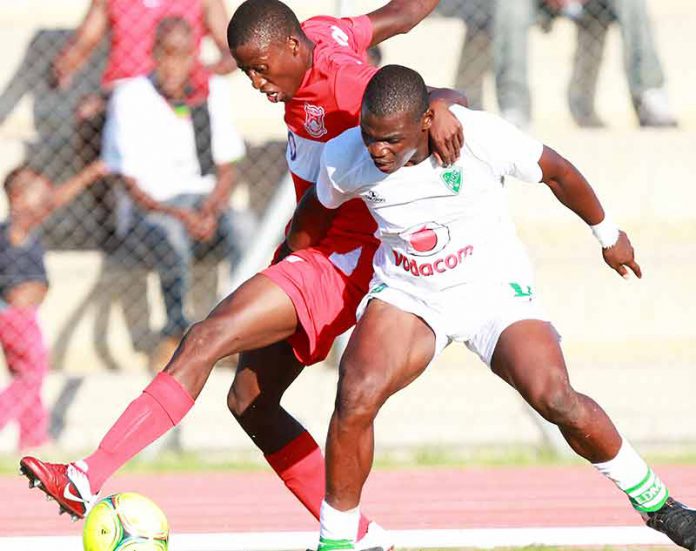 Gaborone United (GU)’s chances of progressing to the next round of the CAF Confederations Cup remain in doubt after they were held to a 2-2 draw by visiting Liga Desportivo Muculmana de Maputo (LDMM) in a game played at UB Stadium on Saturday afternoon.

The Reds have only themselves to blame after putting a below par performance much to the disappointment of their supporters who were in attendance.

LDMM came here looking for an elusive goal and they did not waste time in showing their intentions.
Straight from kick off, towering midfielder Zico opened the scoring with a thunderbolt from outside the box which left GU goalie Noah Maposa sprawled on the turf. The goal left the locals in deafening silence with a few applauding the class strike from the Portuguese.

The Reds seemed to have been shocked by the early goal as they kept huffing and puffing. GU had their first shot at goal in the 25th minute but Jackie Mothatego’s effort did not trouble LDMM goalkeeper Simplex. ┬á

The Mozambican side, which had seven internationals in their squad, enjoyed themselves throughout the opening stanza but they failed to increase the score.┬á

After the break, GU put up a better show and it came as no surprise when Moemedi ‘Jomo’ Moatlhaping headed home from inside the box.

The goal brought hope to their supporters but disaster struck four minutes later. Nippy midfielder Josemar found himself unmarked inside the box and he accepted the invitation to give his side a 2-1 lead. The goal once again brought a deafening silence inside the stadium. The Reds became more desperate as they pushed forward for an equalizer. GU only managed to level matters in the 92nd minute through substitute Stephen Maposa who benefited from a round.

GU coach David Bright said that they slowly lost concentration hence they conceded in the second minute. He pointed out that he fielded an offensive side from the start because there was a need for them to get goals in Gaborone. Despite conceding two goals at home, Bright believes that all is not lost as they can come away with a result in Maputo on March 2.

“I’m confident that we can score goals in their own backyard and proceed to the next round. The good thing is that by the time we travel there, we’ll have time to study the weekend’s game and see where we can exploit them. There is no doubt that they will try to be defensive when we get there but we’ll be ready for that,” said Bright.

After fielding defensive midfielder Tebogo Sebina in an unfamiliar right-back position, Bright said that he had all reasons in doing so. Most people were shocked that Sebina has been preferred ahead of Mpho Kgaswane who sat on the bench for the entire game. ┬á“I used him (Sebina) on the right looking at his experience and the fact that he is comfortable on the ball. If you look at our defence, Tshifhiwa (Kgaswane) on the left has never played at this level. It was going to be a risk having two defenders without (African) experience against a team which had lots of experienced players,” Bright explained. ┬áBefore travelling to Maputo for the return leg, GU have two demanding fixtures to deal with. Tonight the Reds face city rivals Township Rollers at Molepolole Stadium in a league game. On Saturday, GU return to Kweneng capital to face Nico United in a Mascom Top 8 quarterfinal first leg clash.

Meanwhile, Mochudi Centre Chiefs returned home on Monday morning with all smiles after beating Maxaquene 1-0 in a CAF Champions League first leg tie played at the National Stadium in Maputo on Sunday afternoon. The only goal of the game was scored by Jerome Ramatlhakwana.
The return leg will be played at UB Stadium on March 2.