Boko treading on thin ice or is he? 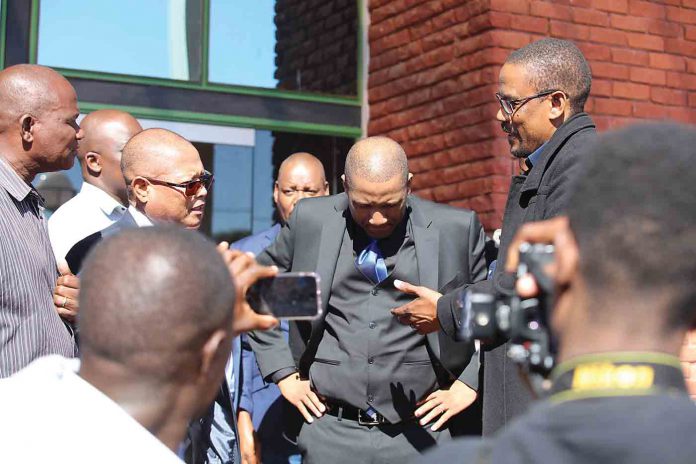 A petition to deny the Umbrella for the Democratic Change (UDC)) leader Duma Boko from standing in this year’s elections following alleged violation of the Electoral Act has all the hallmarks to put the coalition in disarray.

Evidence placed before the Village Magistrates Court on Friday suggests the flamboyant lawyer’s hopes of occupying the State House may be dashed.

The case comes after John Siele approached the court seeking an order to strike off Boko from the voters roll for providing false information about his principal address when he registered in Bonnington North. His principal address is reported to be Tlokweng.

A body of evidence relating to Boko’s principal address has been obtained from parliament, the Botswana Unified Revenue Services and the Water Utilities Corporation.

Appearing on behalf of Boko, Dick Bayford argued that the subpoena that was drafted by Ramalepa’s Attorney to obtain Boko’s personal information was fraudulent.

Bayford told the court that the subpoena was drafted by Ramalepa’s attorney where it was later taken to Village Magistrate Court for a stamp.

Bayford argued that the subpoena that was used to gather information from the BURS, which is personal, contravened the Income Tax Act which states that no such information should be disclosed to anyone other than the individual concerned.

Bayford said the BURS general manager Gofaone Baleseng was made to believe that the subpoena existed when in fact it was a fraudulent subpoena.

Bayford told the court that Siele’s lawyers connived with the Attorney General after Dithapo refused to disclose personal information about Boko.

The lawyer noted that after Dithapo refused to disclose information citing issues of national security Siele’s lawyers connived with Attorney General where they drafted a letter warning Dithapo that if she fails to provide information a court order may be secured for her imprisonment.

Bayford noted the involvement of the Attorney General in violating the secrecy of the BURS and rules of evidence by using a fraudulent subpoena had far reaching consequences.

Bayford was of the view that the AG involvement also violated the rights of the MP when they connived with objector to force Dithapo to release information.

He warned that that for magistrate to allow such evidence that has been obtained illegally would be tantamount to encouraging violation of the court rules of evidence.  He argued that allowing evidence that was obtained illegally has a potential to bar Boko who is also the President of UDC. He noted that there was need to tread with care since the case will go into the annals of history as it has potential to impact on democracy.

Bayford feared that the evidence also stand to disqualify Boko from contesting despite that the subpoena was a fraud.

Bayford further threatened to take the matter to High Court to set aside the decision of the court if the court allowed the evidence that was obtained illegally.

Meanwhile Siele’s attorney, Sidney Pilane noted that Bayford was merely complaining. He advised Bayford to make an application in court if he has a problem with the evidence that his client provided.

Pilane further noted that they had gathered enough evidence to show the court that Boko is not residing in Bonnington North. Pilane also noted that the magistrate should not be intimidated because Boko was a mere voter like anyone.  The case was postponed after Bayford made an application to postpone the case to allow them to prepare for the case.