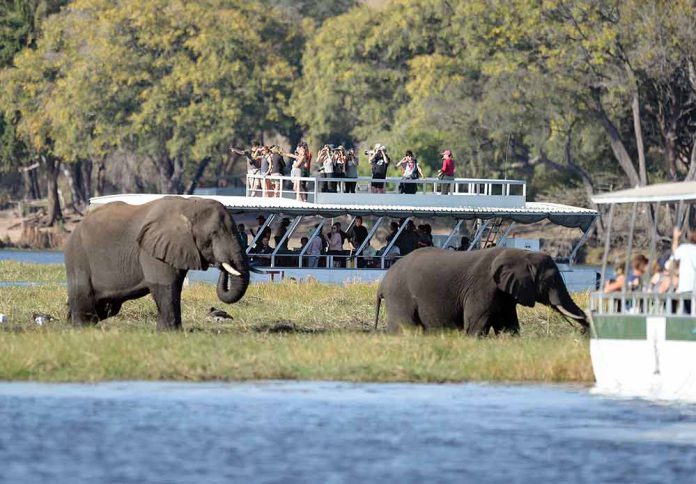 Botswana belongs to elephants, Batswana just live in it. That is the view of thousands of Batswana rural folks who have to pay with blood sweat and tears against these pachyderms which are eating them out of house and home.

Botswana has for many years defaulted on its elephant conservation plan resulting in the country’s elephant population outstripping carrying capacity by 200 percent. And now there is the devil to pay. Director of University of Botswana Okavango Research Centre Professor Joseph Mbaiwa feels there is need to reduce the number of elephants in Botswana. He suggested that “we should have a solution since these elephants are becoming a problem. It is either we donate or sell them to other countries.”  He bemoaned that Botswana no longer has an elephant management plan which could guide the country on how to address the elephant population. Mbaiwa pointed out that the country elephant management which was drafted in 1991 indicated that Botswana should have 50 000 elephants. “It seems like that elephant management plan is no longer in use which makes it difficult to manage elephant which stands around 150 000,” said Mbaiwa.

He said the country has never had capable individuals who could convince organizations such as Conservation on International Trade in Endangered Species of Wild Fauna and Flora to reduce the numbers of elephants.

Government spends at least P10 million a year compensating farmers whose livelihoods have been destroyed by elephants while scores of residents living close to the tuskers are paying with their lives.

With a population of 2,25 million and an elephant population of 150 000, there is at least one elephant for every two hundred Batswana, but these mammoths take up more space that would two hundred Batswana and herein lies the problem. The elephants however are concentrated in the less populated rural areas of Botswana where the human to elephant ration drops to about one to ten and in the battle for survival of the fittest these huge beasts are no match for rural folks.

Government has indicated that compensation to famers whose farms are being destroyed by farmers is bleeding public coffers and unsustainable.

The Department of Wildlife and National Parks has not been able to keep up with the growing claims from farmers and is currently still trying to pay claims lodged in 2016.

Environment, Wildlife and Tourism Ministry, Spokesperson Boikhutso Mashona says in the past four years the claims lodged by farmers have built up to P50, 3 million.

“It has overstretched the department’s resources as indicated by the backlog. For example in Maun they are dispatching 2016 compensation claims,” said Mashona. He said elephants contributed to damage to property in Ngamiland, Chobe, Boteti and Bobirwa areas due to an increase in their population.

Mashona further noted that other areas where elephants continue to be a menace to farmers are Maun, Okavango, Chobe, Boteti, Bobirwa, Tutume, and Nata/Gweta.

He indicated that currently the government has paid farmers out P1 900 000 to Chobe farmers P600 000 to Kgalagadi District P10 million to the Central District and P 500 000 to Ngamiland District.

He indicated that since 2015 eleven people have been killed by elephants.

“Unfortunately there were 22 people who were killed by wildlife since 2015 and elephants accounted for 11 deaths followed by hippos with 7 while the rest were killed by buffalos, crocodiles and lions,” said Mashona.