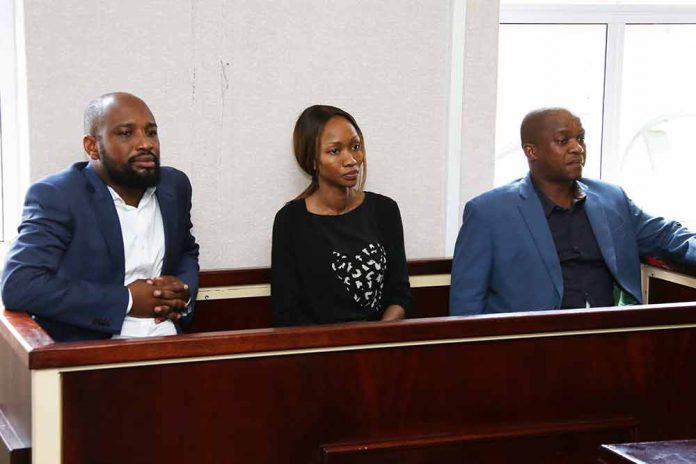 Dignia Systems, the Israeli company whose bank account was credited with the P250 million from the Directorate of Intelligence and Security Services (DIS) is part of a clique of associated companies operating as a cover for shady cash movements and arms. The Israeli company has been linked to “gun-running, money-laundering, secret private armies and spying for corrupt leaders”, Sunday Standard investigations have revealed.

Businessman Bakang Seretse who is facing money laundering charges claims that the Directorate on Corruption and Economic Crime (DCEC) and Directorate of Public Prosecutions (DPP) have closed ranks around the Director General of Intelligence and Security Services (DIS) Isaac Kgosi, shielding him from prosecution. He says Kgosi and Dignia Systems officials should also be charged for money laundering.

Seretse has disclosed in his affidavit that the P250 million transfer to the Dignia Systems bank account was at the written instruction of DIS boss.

An investigative story by PNGblogs of Papua New Guinea (PNG) has revealed how Papua New Guinea Prime Minister Peter O’Neill , his personal adviser Dr Jakob Weiss, Chief Secretary Isaac Lupari and Police Commissioner Gari Baki are involved in a secret plot with LR Group of Israel to create a private intelligence agency and secret paramilitary spy force in Papua Guinea. According to the report the plan is being implemented by an LR Group associate company, Dignia Systems of Israel.

LR Group of Israel and Dignia Systems are so closely linked that the Managing partner of LR Group Itzik Zadik, is also CEO of Dignia Systems Ltd. The Papua New Guinea quotes Australian investigators saying, “LR Group is used as a cover in Africa by Israeli “non-commercial operatives”. It is also used as a cover for cash movements and possibly arms.”

In a strongly worded affidavit, Seretse who described himself and those charged alongside him as pawns reveals for the first time how the DCEC and (DPP) are protecting Kgosi and Dignia Systems from prosecution accusing the law enforcement agencies of dishonesty.

Seretse believes that if the DCEC and the DPP were acting in good faith, they would have charged Kgosi with the same charges that he and his co-accused are facing for allegedly diverting money from the National Petroleum Fund towards the purchase of drones from an unauthorized Israeli supplier.

Charged together with two others ÔÇô Kenneth Kerekang and Botho Leburu, Seretse is currently on bail.

Kerekang, formerly a director at the Department of Energy in the Ministry of Minerals and Energy is currently an executive at the Botswana Energy Regulatory Authority. Leburu works with Seretse in a clutch of investment companies owned by Seretse.

“It is clear that both the DPP and the DCEC tremble at Isaac Kgosi’s name to the extent they cannot even mention it in the pleadings. They do not have the fortitude to interrogate him on allegations affecting the department he heads,” said Seretse.

He also accused the two departments of faking “courage by making an application for an order against an Israeli bank account which they fully know they cannot reach for the reason that is not subject to the court’s territorial and substantive jurisdiction.”

According to Seretse, it is not insignificant that the DPP and the DCEC cannot even mention Kgosi’s name let alone impute impropriety on the DIS in the proceedings even though they have restrained payments made by them as proceeds of crime.

“They are happy at the very least, to tarnish his name by using us as pawns in their war with his department. I must mention that during their interrogation the DCEC investigators repeatedly spoke of how (they) had finally nailed Isaac Kgosi,” said Seretse.

He said that “In particular, one of their investigators would loudly remark , continually that “Re mo tshwere Kgosi, gompieno” to wit; “we have finally nailed Kgosi.” In spite of all that they have remained in their offices and cannot even cross the street to talk to him,” said Seretse.

Seretse said that the P250 million from the National Petroleum Fund that was authorised by the DIS to purchase drones from an Israeli supplier was  “not a  fake transaction whereof myself and the companies involved had unlawfully and without authorisation come up with a scheme to divert government funds to ourselves.

Seretse said , if indeed that was so, Kgosi who contracted his (Seretse’s company) Khulaco and that issued the instruction for the payment to the Israeli supplier Dignia Systems “would have been charged alongside us.”

Seretse further stated that the Acting Permanent Secretary in the Ministry of Minerals, Green Technology and Energy Security, Dr. Obolokile Obakeng who authorised the variation at the request of DIS and all the people that Dr. Obakeng consulted with before authorising the variation “would have been charged alongside us.” Seretse says officials of Dignia Systems would also have been charged.

“It is not insignificant that no arrest warrant has been sought and issued against them. They are not wanted persons and not mutual legal assistance has been filed speaking to their circumstances as regards this matter,” said Seretse.

He also added that “One wonders therefore how their accounts can be subjected to a restraining order when they are not accused of any wrong doing and there is neither a mutual legal assistance nor a extradition request against them. Clearly the citation of their account is meant to save face.”
Seretse said that in spite of the fact that a statement was obtained from Kebonang, the DPP has not disclosed that in its paper before court adding that the prosecution also failed to disclose that the request for funds and that variation use were sought by the DIS.

“If this transaction is indeed dishonest and was misappropriation of public funds, why have the DIS Director General, Dr Obakeng and the portfolio Minister not been arrested and charged alongside us for the alleged fraud. Why is it that the DCEC have chosen to target the director of Khulaco and Kerekang who minor, even peripheral players in the government project to the exclusion of decision makers,’ he queried.

“The Applicant (DPP) does not state if the DIS ever got value for the amounts paid to Dignia Systems and the payment was on the express and written instruction of the DIS to Khulaco,” said Seretse.

Seretse further stated that “the Applicant (DPP) does not disclose that before the funds were disbursed, the matte was actually referred to PPADB for single sourcing at the instance of DIS.”

“I’m advised by Kenneth Kerekang and verily believe that same to be true that the DIS preferred the appointment of the contractor who had constructed the facilities in 2010,” he said. Seretse stated that the PPADB turned down the request insisting that the matter go to open tender but by then the amount (P230 million) had been ring fenced at the instance of PPADB who had reasoned that for them to adjudicate upon the request they had to ensure that the funds regarding the intended project were available.