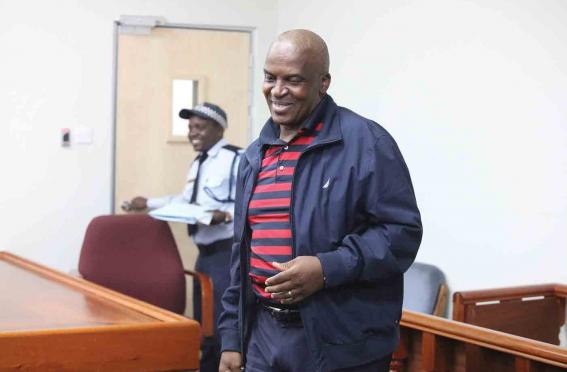 Former Director General of the Directorate of Intelligence and Security Services (DIS) Isaac Kgosi dipped his fingers deep in the kitty of the National Petroleum Fund (NPF) to steal P42 million using a company known as Khulaco (Pty) Limited.

The Directorate of Public Prosecution (DPP), in an affidavit deposed at the Gaborone High Court, says the former Directorate of Intelligence and Security (DIS) stole the millions as a public servant.

It seems Kgosi might run but he can’t hide from the DPP which is pursuing him for the matter that relates to the P250 million National Petroleum Fund (NPF) money laundering case.

The former DIS head honcho is said to have acted corruptly in the matter. He is presently in Malaysia for medical attention coupled with some unexplained visits to Israel in between.

Initially, the DPP deposed an affidavit as one of the key witnesses for the DPP. In his affidavit at the time, Kgosi denied knowledge of the accused persons in the matter.

But now the DPP has turned the tables and states that Kgosi acted corruptly contrary to section 24A (1) of the Corruption and Economic Crime Act, in that “he was a public officer, used his position as Director general of Intelligence and Security, a public body to obtain valuable consideration for the benefit of Dignia System Ltd and Khulaco (Pty) Ltd and Bakang Seretse respectively.”

In his supplementary affidavit, the Directorate on Corruption and Economic Crime(DCEC) senior anti-corruption officer Moses Tshelwane states that Kgosi was at the time employed as Director General of DIS and wrote several correspondence in that capacity filed of record,

“…That in that position, he was the head of the DIS, a public body established in terms of section of 4 of the Intelligence and Security Service Act…”

According to Tshelwane, Kgosi wrote several correspondences as the Director General to request for money from the National Petroleum Fund and directed that the money be transferred and paid into the account of Khulaco (Pty) Limited as a result of which about P42 million was used by Khulaco purportedly managing it as transaction advisors, notwithstanding that there was already in place Kgosi Capital as the Fund Manager appointed under the Government of Botswana and basis Points Capital Consultancy agreement provide (sic) the same service.

“Whilst payment would have been made under the Consultancy Agreement, to Basis Points, it was duplicated and ballooned in favour of Khulaco (Pty) Ltd) That the sum of P118, 945,045.70 was paid to Dignia Systems Limited as advance payment contrary to Regulation 88(1) of the PPADB Act and to secure equipment and services that are irrelevant to the supposed threat,” said Tshelwane.

He stated that without any specification of the deliverables and what was actually being procured, the contract with Dignia was concluded on the basis of the supplier’s offer contrary to the public procurement process of the PPADB Act and the Special Procurement and Asset Disposal Committee for strictly confidential and utmost secretive procurement.

That notwithstanding,Tshelwane said, as the time of the 18th month contract with Dignia that in line with his work, he investigated and analysed the transactions system had its course, only about 5 percent of the contract price US$ 22, 640.00 (about P240 million) had been supplied according to Sehunelo Khunou, the procurement manager.

“That having at all time Isaac Seabelo Kgosi was aware or ought to have been aware of the pre-requisite process of the PPADC… given that on 23rd August 2014, they requested a waiver for direct procurement and same was approved for P11,000,019.00,” said Tshelwane.

He added that “similarly, Isaac Kgosi approached PPADB for direct procurement of Petrocoms Pty ltd for the construction of strategic petroleum storage at the price of P644 million and was turned down but had made no mention of having secure P250,000,000,00.”

Tshelwane further stated that in abuse of office “Isaac Kgosi, jointly with Kenneth Kerekang, Bakang Seretse, Khulaco and Kgosi Capital, the latter three aided and abetting the serious crime related activities, by virtue of the roles they played in the securing the disbursement of the P230, 000, 000, 00, abused the authority of their office, obtaining arbitrary the disbursement of the amount of P230, 000,000 from the government of Botswana, National Petroleum Fund to Khulaco (Pty) Ltd).

“I state that the arbitrary disbursement of the P230, 000,000, caused great prejudice the right of the Government of Botswana, in that the department of Energy’s projects which were ongoing and had to be suspended because of lack of finance. In this connection the Francistown Petroleum projects and Tshele projects, amongst others,” said Tshele.

He further stated that the Government of Botswana suffered prejudice to its rights in that the depleted National Petroleum Fund suffered successive petroleum increases resulting in the increase adversely affecting the citizens in the 15th October 2018 and 15 November 2018 respectively.