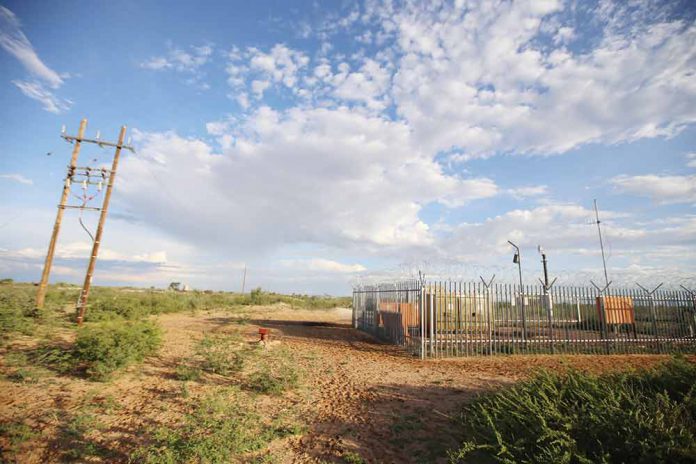 Former Directorate of Intelligence and Security Services Director General, Isaac kgosi must have set his heart on a perfect hideout for his alleged ill-gotten gains when he hacked his way through kilometers of harsh and unforgiving terrain far out of the beaten track to put up a lavish farm.

Locating the farm just outside the small settlement of Maboane about 60 kilometers north of Jwaneng was however very easy for the Sunday Standard team. The 40 by 40 hectares of state of the art technology, avant-garde security and thoroughbred livestock is something of a landmark and “talk of the town” in this god forsaken outpost.

The farm is a self contained fortress complete with CCTV cameras, a 60m3/hour flow rate borehole enough to supply eight small villages with a population of about 1000 residents each with water, A 200 KVA electricity transformer connected to the Jwaneng electricity grid with enough capacity to power more than 100 households in a Gaborone low cost neighbourhood, an industrial back-up generator and a mini solar power plant. The farm electricity hub is monitored by four CCTV cameras and secured by Concertina wire or Dannert Wire. This is the type of razor wire  used in DIS complexes throughout the country and is most often used to form military-stylewire obstacles. It is also used in non-military settings, such as prison barriers, detention campsand riot control.

The CCTV cameras allows Kgosi’s farm hands to keep an eye on the more than 1000 thorough breed Boer goats, Kalahari Red goats and Dorper sheep with a combined estimated value of P 7 million. The value of the flock exceeds the salary Isaac Kgosi earned during his entire 10 years as DIS Director General. The farm also boasts an elaborate lot feeding of about 130 Brahman, Simmental and Charolais pure breeds.

A contingent of DIS agents and Botswana Unified Revenue Services (BURS) officers escorted Kgosi to the farm on Thursday as part of an ongoing lifestyle audit on the former DIS boss.

The Maboane farm is the epicenter of the ongoing investigation against the former DIS boss. During the search on Kgosi’s properties, the BURS seized documents detailing how the 130 beasts changed hands between Kgosi and AfricIntel boss Richard Miles. The documentation is expected to provide supporting information for the Directorate on Corruption and Economic Crime (DCEC) investigation into Kgosi’s alleged corrupt relationship with AfricIntel boss Richard Miles.

The DCEC earlier investigation had revealed that sometime in 2010, the DIS is alleged to have fraudulently awarded AfricIntel a tender worth P100 million to train its intelligence and security personnel.

A dispute subsequently arose between Phelan and AfricIntel because the Bowman’s boss demanded that his share be increased in light of the inflated invoice presented to government. Sunday Standard has established that Phelan has agreed to testify against AfricIntel and Isaac Kgosi. The BURS findings have provided for the first time, information on Kgosi and Richard Miles’ personal relationship, suggesting that the duo may have conspired to defraud government of close to P100 million.

Further investigations revealed that the DIS under Isaac Kgosi allegedly bought training premises at Kgale Mews) from Richard Miles of AfricIntel under dubious circumstances. The premises were also overpriced.

The investigation has also branched off into an inquiry on how the DIS boss was able to connect his farm in Maboane to the Botswana Power Corporation grid. There are no records to shed light on how much Kgosi paid for the connection and the BPC Chief Financial Officer Cross Kgosidiile is alleged to have insisted that he was not aware of any such dealing between Kgosi and the power utility.