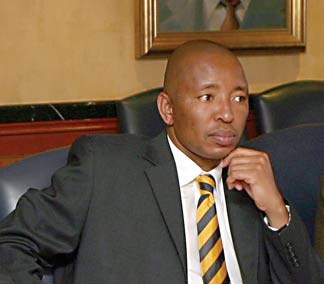 A number of senior executives at Debswana, including the Deputy Managing Director, Len Makwinja, have this week resigned from the world’s leading diamond miner as part of the ongoing restructuring exercise marshaled by the Group Managing Director.

The rush to leave Botswana’s highest paying company is seen as means to beat a deadline set by Managing Director Blackie Marole for people to opt a lifeline by way of voluntary severance packages.

Marole had indicated that beyond his deadline he would use his discretionary powers to resolve the issues about those he felt did not fit the bill of the new direction he wants to take Debswana.

Early this year, Marole signaled to all employees at Debswana Head Office that he was restructuring the company.
At the time, Marole made it clear that the restructuring would affect everyone but himself.

In an interview with The Sunday Standard this week, the company’s Head of Communications, Jacob Sesinyi, confirmed that he was one of the people leaving.

A number of people at the technical department have also left.

While Sesinyi would not give names, The Sunday Standard can confirm that other than Makwinja, other very senior and long serving hands, like Joe Matome, Spencer Kaisara, Fantan, Mmetli Masire, Mojaphoko and Mphusu had also left.

Makwinja was the first citizen General Manager to head a Debswana mine.

“A cross section of Debswana employees has volunteered to go,” said Sesinyi on his last day as Debswana Communications Chief.

Sesinyi said the restructuring exercise will continue well into next year.

He said it is meant to enable the company to introduce shared services. As a result of shared services, especially at Head Office, redundancies are expected.

“I have opted to take the voluntary severance package. Many people have already left, and many will be leaving.” Sesinyi said Debswana is introducing a new set of conditions of employment.
Henceforth, all Debswana employees will be recruited on a three to five year contract.

He said instead of staying, a number of employees opted for packages.

Sesinyi dismisses insinuations that Marole is using the restructuring as a purging exercise to gain full control of the company by purging those viewed as too close to his predecessor, Louis Nchindo.

“People read too much into this restructuring. I guess it is because when he arrived, Mr. Marole introduced a lot of changes including canceling some projects started by Mr. Nchindo,” said Sesinyi.