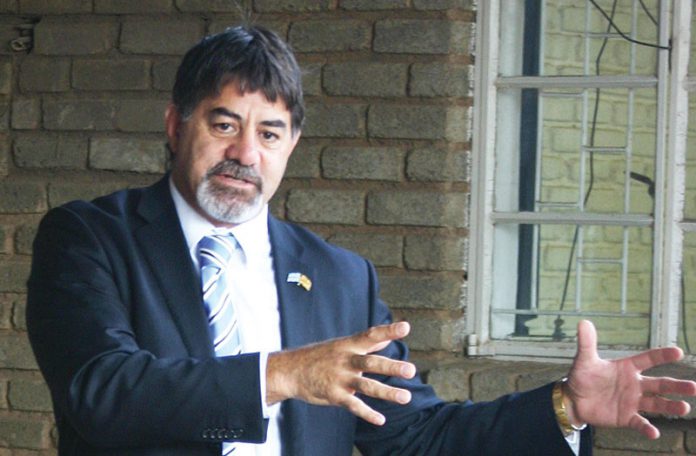 There are allegations that the Minister of Agriculture, Christiaan de Graaff, has repeatedly broken the law by issuing export permits for live cattle and meat in contravention of Section 21 of the BMC Act ÔÇô a charge he has vehemently denied.

The Minister insists that the Act empowers him to do so.

One such permit for the export of 30,000 live heifers and steers from Zone 2 in Ngamiland to the DRC was issued on 16 April 2012 under alleged questionable non-transparent circumstances to Pedally Holdings, a Botswana registered company controlled by the Page family of South Africa who are said to be closely associated with the Minister. Coincidentally, the Minister recently approved the allocation of one of the Banyana leasehold farms to the Pages.

The Pages ÔÇô father John and sons Glen and Bruce – own a company called Claremont Farming located in Cambridge, East London, South Africa which operates three abattoirs, a feedlot and a livestock export business that was recently featured for the second time on the SABC Carte Blanche expos├® television program for their inhumane treatment of the live cattle they export by ship to Mauritius.

De Graaf has a different interpretation of the BMC Act. He said that he is empowered to issue live animal export permits. The Minister insists that it is his responsibility to look for markets for beef and wonders what the fuss is all about. De Graaf said he was approached by one company, which he did not name, to export live animals to the DRC. He said that he gave the company the green light and has since passed the proposal by the company in question to the BMC.

“A certain company put a proposal on my desk to export 30 000 live cattle to the DRC. I gave them the green light. When proposals such as this one come to me I take them to the government to get approval. It is my responsibility as the Minister to look for new markets for beef in this country. Ngamiland is over populated with over 100 000 cattle, Bobirwa is also overpopulated with between 50 000 and 80 000 cattle and therefore, it is important to make sure we can market those cattle,” de Graaff told the Sunday Standard on Friday.

He said that his Ministry was working around the clock with the BMC to see if they can get an alternative market for beef as well as live animals.

The Minister revealed that he met his counterpart in Zimbabwe on Friday. At that meeting, according to him, they agreed to continue exporting live animals from red zones. He added that he also led a delegation to Angola last year that included the BMC to look for new markets.

“When we had Foot and Mouth Disease outbreak in the North East District, Zimbabwe showed interest to buy cattle from our contaminated zone and we agreed. We have signed a Memorandum of Understanding between the two countries allowing us to export live cattle after Zimbabwe had approached us to buy live cattle,” said the Minister.

There are also allegations that the Minister has recently illegally issued another export permit without the approval of the BMC and without being Gazetted again in contravention of Section 21 of the BMC Act. This was to TNM Enterprises for the export of meat to Mozambique. The Minister has denied knowledge of the alleged export.

It is alleged that by issuing only one permit to the Pages, the Minister in effect has granted their Pedally Holdings company a monopoly on live cattle exports from Ngamiland, which will prevent farmers from obtaining better prices for their cattle if there was open market competition from multiple buyers/exporters.

Though Dr. David Falepau, the recently fired BMC CEO, declined comment, another source close to the transaction has confirmed that the Minister introduced the Page family to the Department of Veterinary Services (DVS) and to Falepau with a proposal to export live heifers and steers to the Democratic Republic of the Congo (DRC). The Page’s proposal, which apparently was actively supported by the Minister, called for the BMC to buy live heifers and steers from Ngamiland farmers in Zone 2 on behalf of the Pages who would then buy them back from the BMC at P8.00/kg live weight even though the going price was up to P13/kg live weight. Falepau resisted pressure to do the deal because it would have resulted in a P40 million loss for Ngamiland farmers, for the BMC and for all cattle producers in Botswana who indirectly would have subsidized the Page’s purchase of BMC cattle at below BMC’s cost. The question farmers are asking is who would have stood to benefit from this P40 million windfall?

In their subsequent application to the Minister for a live export permit, the Pages offered to buy Ngamiland cattle directly from farmers and to pay the higher prices recommended by Falepau of P11/kg live weight for steers and P12/kg for heifers. However, as no pricing conditions were included in the Page’s export permit, there is no requirement for the Pages to stick to the prices they have offered to pay.

In another curious twist, in 2011 the Minister forced the BMC to pay the cost of upgrading cattle handling facilities and for DVS’ services which were necessary to support BMC’s export of live cattle to Zimbabwe. In contrast, to support the Pages export of live cattle to the DRC, the Minister is giving the Pages DVS’ services and the use of the Makalamabedi Quarantine camp as a handling facility for free.

Amongst the cattle farmers, cattle farmer associations, BMC senior officials and BMC Commissions who were interviewed for this article, there is a growing concern that repealing BMC’s export monopoly now and allowing the export of live cattle would be like kicking the BMC when it’s down.
It is feared that the diversion of live cattle away from the BMC in the middle of its current financial crisis when it’s operating at less than a third of its throughput capacity, would cause the BMC to collapse. This is making farmers question why the Minister is pushing so hard for the enactment of the Botswana Meat Commission (Amendment) Bill, 2011 at the July 2012 session of Parliament, which many fear will put the last nail in the BMC’s coffin.

The most controversial amendment in the BMC (Amendment) Bill, 2011 is section 21(1), which would do away with the BMC’s export monopoly. The proposed Section 21 simply says that anyone can export cattle or meat from Botswana if he has a permit issued by the Minister. If passed, this amendment would allow the Minister to issue export permits for live cattle and meat products to anyone he chooses without having to give any reasons why an application has been delayed or refused and without any right of appeal.

Falepau is known to have objected to the removal of the BMC monopoly to protect BMC throughput and to protect small scale cattle farmers from exploitation.

Alarm is spreading amongst farmers that a cartel is being formed to control the export of live cattle and meat from Botswana once the BMC’s export monopoly has been repealed. Farmers see Falepau’s dismissal and the removal of the BMC’s export monopoly as critical parts of a broader strategy to weaken the BMC to the extent that government can no longer justify throwing good money after bad. At that point, it is feared that the cartel will step in and buy the BMC. And because the BMC owns the only two EU approved export abattoirs in Botswana, the cartel will have secured an export monopoly on all Botswana beef to the lucrative EU market.

Stated one frustrated farmer: “We can’t trust the Minister or PS to take care of cattle
Though there is general agreement amongst farmers, BMC and MOA officials that the BMC export monopoly should eventually be removed, they feel strongly that it must only be done at the right time and under the right conditions when the BMC is standing firmly on its own two feet. But now is not that time,” said one very frustrated farmer. “We no longer trust the Minister or PS, who have their own agendas, to take good care of cattle farmers or the BMC. So we are praying that the President will stop these amendments to the BMC Act before it’s too late.”