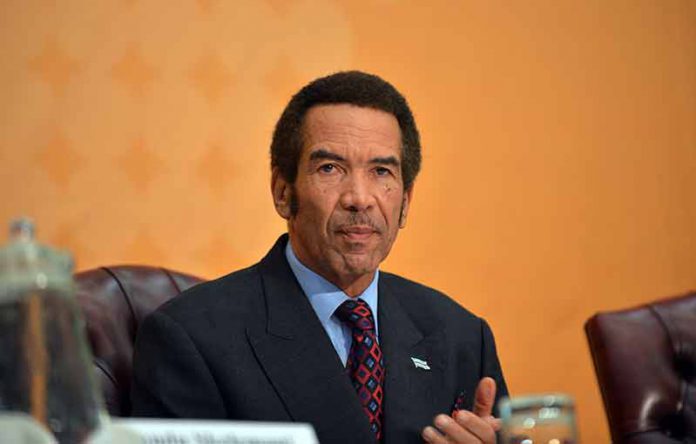 The Umbrella for Democratic Change (UDC) Parliamentary candidate for Francistown South, Wynter Mmolotsi this past Saturday afternoon cautioned the troubled Botswana Democratic Party (BDP) candidate for Tlokweng, Elijah Katse to be cautious as his steps against President Khama are similar to those of the late Gomolemo Motswaledi before he met his untimely death. He could be next.

He said this in a political rally in Mochudi, marking the launch of UDC’s parliamentary candidate for Mochudi West, Gilbert Mangole and his 12 council candidates.

“What happened with Motswaledi was that he challenged Khama as the first step. Secondly, he took Khama to court, third he was suspended from the party, quit it and formed BMD; and lastly he is no more. Katse is in the third stage- challenging Khama at court, where Khama has infinitely confessed that it is him and not the BDP that wants him suspended. He should watch out. He should consider joining our camp before it is too late,” said Mmolotsi to deafening shouts of applause.

Mmolotsi then turned to the Directorate of Intelligence Security Services (DISS) who he assumed were present in the rally:
“Colleagues in the DISS I know you are present, go tell your bosses that if they feel like eliminating us they may do so because we miss ‘Sir G’ so much.”

He said that their late colleague had left with them words whose opinions should be followed if his soul is to rest in eternal peace. These are that, ‘Yoo sentseng a baakanye he who has erred should rectify the mistake’.

He said it is in this regard that as the UDC they are forgiving the former presidents, Festus Mogae and Sir Ketumile Masire.

“Rre Mogae has rectified the mistake he made to the nation by appointing Khama as his successor, only to turn this state, renowned for its peace and tranquility into a dictatorship state. He revealed this reality to the world through a television interview in Tanzania recently. We forgive him for his mistake. We also forgive Sir Ketumile for he mended his mistakes by motivating young people to take over from where Motswaledi left off and lead the nation. Dr. Margaret Nasha is also forgiven since she published a book that revealed a lot about the BDP inadequacies,” he said.