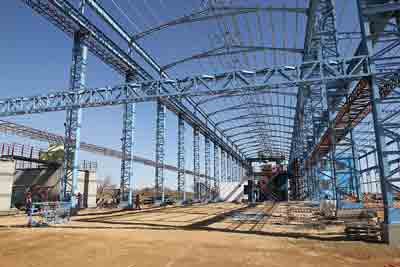 As is stands a steel-ball is in the court of Pula Steel and Manufacturers (Pty) Limited liquidators ÔÇô John Hinchliffe Consultants.

The man running the firm – John Hinchliffe has since set the first week of August 2019 as the time in which he will convene Pula Steel creditors to map a way forward for the liquidated company and decide on the future of the possibly forgotten 200 former employees. The 200 have been without jobs since the closure are still hopeful to get their jobs back as long as the right button can be pressed by the liquidator.

Amongst the creditors of Pula Steel is the previous shareholders such as Citizen Entrepreneurial Development Agency (CEDA), Wealth Creations, Verma family and BCL limited (liquidated).

The imminent meeting, which forms a series of others held between the two parties in the past, will decide on the method of disposal of the assets, mainly the Plant, including the Rolling Mill of the liquidated company. The liquidator was recently given a green light by the High Court to sell the Rolling Mill which was previously excluded from the tender.

Following a failed attempt to sell the main plant to an unnamed preferred bidder earlier this year, the liquidator and the Master of the High Court are reported to have finally come to an agreement to finalise the process of giving another shot at the disposal of the listed assets of the Selebi Phikwe based company.

Already the two ÔÇô the liquidator and Master of High Court have agreed to continue the process of selling the plant by way of private treaty negotiations as opposed to issuing a new tender. The private treaty negotiations are expected to be held and concluded with firms which had previously expressed interest and are believed to have financial capacity to complete the transaction.

At the August 6 meeting, the liquidator ÔÇô John Hinchliffe is expected to tell the creditors that selling the Pula Steel assets through private treaty negotiations is the “preferred” method of disposal. Both Hinchliffe and the Master of Court are believed to be in agreement that the method will be quicker solution as compared to retendering which could come with extra costs.

However the creditors, atleast some of them, might want to know just a little more about what happened in the futile exercise of selling the main plant in the past several months. It is highly likely that some could go as far as asking the liquidator to account for the 20 percent deposit money from the unnamed bidder who defaulted and could not pay the full amount earlier this year. In April 2019 Hinchliffe admitted to the creditors that an unnamed preferred bidder was unable to make full payment as required in terms of the original tender document. The requirements amongst others, made it mandatory for bidders to pay un-refundable 20 percent of the bid amount as condition to qualify for the tender.

“The biggest question that both the liquidator and the WH Auctioneers ought to answer is about the tender irregularities. For instance the period it has taken since the last update to the creditors and members of the public and the secrecy behind the original tender winner”, said a source close to the matter last week.

While the Sunday Standard has not been able to obtain comment from a majority of the Pula Steel creditors regarding the process of the previous tender, it has emerged the liquidator has since notified them (creditors) that the original tender has since been terminated on account of passage of time and the addition of some assets to the list of “disposals”.

At the time of going to press, the liquidator indicated to the Sunday Standard that he was overseas but confirmed that he sent communication to the creditors this week notifying them of the imminent August 6 meeting.

The original tender was closed more than four months ago and to date no public announcement has been made, leaving atleast 200 former employees of the company in the dark. At the same time some of the creditors are also said to be worried about how the process was handled thus intending to place Hinchliffe on the hot red seat come August 6.

From 2012 when the Pula Steel and Casting Manufacturing Limited plant was set up until around 2014 when a new board of directors for the company was constituted all seemed like a bed of roses.  Things however turned very ugly in October 2016 when – BCL Limited which was one of the shareholders was placed under provisional liquidation.

Thereafter several twists of fate obscured the many charms that Pula Steel ÔÇô the country’s pioneering steel plant promised. The company was placed under provisional liquidation in October 2017 following the internal bickering at the board caused mainly by the fight for the BCL Limited stake. Before October 2017, CEDA, which at the time was now majority shareholder moved to place Pula Steel under judiciary management ÔÇô a move that left one of the founding shareholders ÔÇô The Verma family suspicious.

The decision to keep the name of the initial successful bidder a top secret has also left the Verma family even more frustrated.

“As a creditor till date I have not been informed if there is a taker of the Pula Steel, what processes were taken into account, how many bidders were there”, Deepak Verma said in April 2019 on behalf of his family company.

To date, Verma ÔÇô who says he has interest to resuscitate the plant maintains that the downfall of Pula Steel should be linked to the still-born dealings and misleading deals that happened between former investors.