Racism claims haunts Khoemacau Mine but… 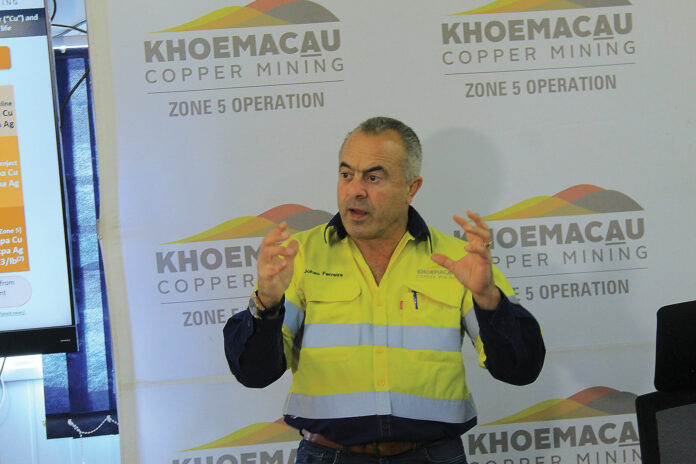 The Chief Executive Officer of Khoemacau Copper Mine (KCM) Johan Ferreira has strongly dismissed accusations leveled against the mine over reports of racism. The copper mine has been in the spotlight recently after there were reports of racism and segregation of its employees by its sub contracted company Barminco. Reports suggest that the employees are discriminated by the colour of their skin.

Barminco is an Australian company conducting underground mine works for KCM. Last month a local employee was reportedly assaulted by an Australian national at the mine and racism was reported to be the motive behind the incident. Botswana Miners Workers Union (BMWU) has also accused the mine of neglecting all these reports.

It is alleged that mine workers at Barminco are treated differently depending on the color of their skins. It has been reported that white employees are more often given an upper hand against their local black counterparts.

Answering questions from the media regarding these allegations last week Ferreira said they are aware of such accusations but do not condone racism in the mine.

He said their code of conduct is very clear.  He further said should an employee feel aggrieved due to issues such as racial discrimination there are internal and external processes address such .

Adding to what the Chief Executive Officer had said, the Vice President in the Human Resource and Communications section at KCM, Mmama Mhlanga- Fichani said they have the “Tip off anonymous” an external process which is a whistle blowing platform where those aggrieved can report against discrimination. She also said whenever employees are recruited into the mine they are trained on the code of conduct which speaks against discrimination.

“This is our internal process.Every employee has to recommit to the code of conduct. Our expatriates also go through cultural training when they arrive in the mine. They are taught on how to do business in Botswana and how to relate to Batswana. We also have an open door policy where are our employees can come and share their concerns or experiences. We do not only leave everything to the “Tip anonymous,” process she said.

The mine has also been accused by BMWU for flouting employee safety regulations. In June 2022, two employees lost their lives due to a mine accident. Asked on safety issues Ferreira said Khoemacau Copper Mine is a healthy, safe and sustainable mine. He said all systems and processes are in place to ensure that there is health and safety for all employees. Asked on the June mine accident which claimed two lives he said there was not much he could explain as the issue was still with the Department of Mines. The deceased employees are two males; a Motswana and an Indonesian national.

“As soon as they are finished with the investigations we will engage with all the relevant stakeholders and the parties to actually communicate the outcome,” he explained. Khoemacau Copper Mine, which is located in Ngamiland District is owned by Cupric Canyon Capital LP another Australian company. The mine currently has a total of 1 500 employees, with 1 350 being locals while 150 are foreigners.