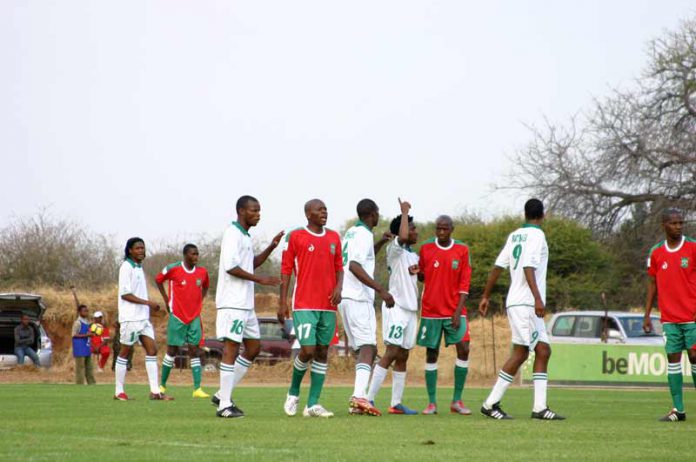 When the Be MOBILE Premier League season started, BDF XI was not tipped as one of the favourites to clinch the league title.

But after their 4-3 thrashing of Mochudi Centre Chiefs at the Molepolole Stadium on August 20, many people changed their minds and claimed that Matebele have quality to compete.

After a promising start, which saw them stay at the summit for some weeks, Matebele have quickly dropped down the table.

In seven games, BDF XI has only managed to collect 13 points out of a possible 21. This is not a good record considering that at the start of the campaign, Matebele chairman Boikanyo Addanes gave coach Nelson Setshwane┬á the mandate of delivering silverware, in particular the league title.

While Matebele have been scoring goals with ease, their main problem has been their failure to defend well.

According to pundits, the BDF XI defence is the main reason they cannot challenge for honours.

Having scored 17 goals, BDF XI has leaked 14 goals, an average of two goals per game.

History shows that BDF XI is traditionally known for a watertight defence. When they won the league under coach Stanley Tshosane, Matebele boasted a fine defence made up of Shepherd Musekgwa, Pius Kolagano, Thebeetsile Raditsebe and Gary Mkhandawire.┬á

When there was need, Tshosane at times called on the late Richard ‘Bricks’ Gabaitsane to do the job in case of suspensions and injuries.

The current BDF XI’s ┬ásituation is not helped by the fact that national team captain, Mompati ‘Apache’ Thuma, has only featured in two games due to an injury he is carrying.

Thuma has been a pillar of strength for BDF XI in the past and his absence has caused headaches for coach Setshwane. In the games Thuma has played in, they conceded six goals including the 4-1 hammering by ECCO City Greens at the SSKB Stadium in Mogoditshane.

“His (Thuma) experience is what is lacking in their defence right now. You need someone vocal in defence who can manage to avert danger before it comes,” said one observer during their goalless tie against Great North Tigers (GNT) on Thursday night.

Setshwane has now been forced to play with Seboloko ‘Naughty’ Khutsafalo and Moreetsi ‘Resco’ Mosimanyana at the heart of the defence. But the duo has been exposed by opponents in recent weeks, especially in their 3-2 defeat to Gaborone United (GU) last weekend.

To make matters worse, their right-back Tshepo Baipoledi is still new in the Premier League and has to learn the ropes. While Baipoledi has potential to become one of the best defenders in the game, he was found wanting against GU and his lack of experience allowed Tshifiwa Kgaswane to make a cross which led to the Reds’ third goal scored by Baloni Chiseko.

Since the league started, BDF XI has managed to keep only two clean sheets against lightweights FC Satmos and GNT.
Matebele were lucky to leave the field against GNT having not conceded a goal.

Addressing journalists on the eve of their game against GU, Setshwane admitted that something needs to be done about their defence.

“There is no doubt that we’ve a problem in our defence but it’s not something we can sort out overnight,” he said.

After the GU game, Setshwane was clearly not pleased with his defence as he blamed them for applying their roles like schoolboys.

According to Tshosane, who watched the army side going down to GU, BDF XI defence lacks confidence.
“They (defenders) do not know how to complement each other. In football, positioning is very important and this is another aspect they’re lacking. GU capitalised on their failure to position themselves well to score all the three goals which won them the game,” said the national team coach.

Football analyst, Molatlhegi Mangole, said that BDF XI’s main problem at the moment is that their defence lacks tactical discipline hence they are conceding so many goals. He said that without the experience of Thuma, BDF XI does not have someone who can do their dirty work.

“I have picked that they struggle a lot in dealing with crosses into the box. They do not have someone who commands the area well like Thuma. Even their goalkeeper Cheeseboy Moilwa finds himself struggling without someone with the leadership skills of Thuma. The other issue is that BDF XI corners are mostly taken by (left-back) Otlantshekela Mooketsi and there is nobody who covers him in case of a counter-attack,” said Mangole.