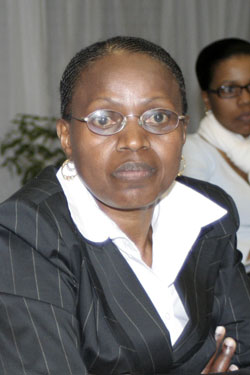 University of Botswana academics last week contradicted a position documented by the Bank of Botswana that government is crowding out commercial banks in credit issuance.

Presenting their papers at the just ended 4th African Finance Journal Conference in Gaborone, the UB trio of Stephen Kapunda, John Shunda and Beatrice Magembe, noted that the government’s seed funding through the Citizen Entrepreneurial Development Agency (CEDA) plays an insignificant role in business loan financing. The UB dons, led by Magembe, presented a paper on ‘Small and Medium Enterprise finance: The case for Botswana’. The result of their research revealed that the main source of SMEs’ start-ups emanates from personal loans at 83 percent. In terms of capital needed for business expansion, 48.4 percent of the respondents preferred commercial banks while 30.1 percent opted for CEDA and 21.5 percent said they would rely on family backing.

“We were even surprised by the results because CEDA offers subsidized loans and one would think that CEDA would be the main source of finance to SMEs,” she said.

The problem, she said, might be the complicated forms that have to be filled.

With 83 percent of SME start-ups founded on personal loans, this runs into contradiction with the assertion that CEDA is stifling commercial banks.
In its latest annual report of 2006, the Central Bank did not take kind to financial assistance schemes by government aimed at boosting citizen enterprises. The bank said soft loans and grants offered by the government under various schemes are not a panacea to increased private sector activity in the economy.

“The provision of loans on generous terms using government funds may also result in crowding out of the private financial sector in the credit market,” reads the report. This is because if the borrowing terms from government supported institutions are both easier and expose the lender to greater risk relative to the borrower, the latter would have more incentive to borrow from government. The bank warned that institutions such as commercial banks and non-governmental financial institutions have the potential to lose their potential customer base to government supported institutions. The bank further argued that private lenders are more profit oriented and are likely to have better skills and greater motivation to fully monitor projects in an effort to minimize default risk than it is with government sponsored institutions.

“As shown by the experience of Financial Assistance Policy (FAP), provision of subsidized capital fosters low return projects that will not be viable when the subsidies are no longer available,” reads the report in part.

Under CEDA, the bank warns of inherent moral hazard. It says the absence of equity contribution might indirectly act as a disincentive for entrepreneurs to strive for the success of their businesses as there is no financial risk linked to the ultimate collapse of the business.