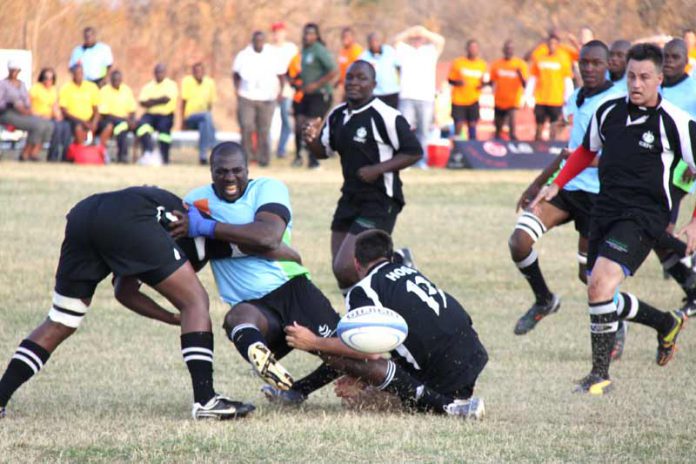 The win saw the Rhinos break a two-year jinx that has seen them lose closely contested matches against their city nemesis.

As expected, the game between the two Gaborone rivals was a closely fought affair, which saw only two tries scored, courtesy of the Rhinos quick backline.

The Hogs were, however, the first to draw blood when Eddie Oosthuizen scored a penalty to give the defending champions a 3 ÔÇô 0 lead over Rhinos.

The latter were, however, swift in their response as they hit back with a Biki Mawela try, with the resultant conversion easily buried by Tshoganetso ‘Shakes’ Katse. The try was to be the only one scored in the first half as the Hogs tightened their grip in the centre, closing all avenues for the speedy Rhinos’ backline that includes the likes of national team players, Katse, Mawela, Ntsebe and Tefo Keothepile.

The Hogs should have reduced the deficit to a point when they were awarded a penalty midway through the game, only for the ever reliable Oosthuizen to miss. The Hogs kicker was, however, not to be denied as he buried the next penalty to ensure that his team reduced the deficit to 7 ÔÇô 6 at the end of the first half.

Coming into the second half, Hogs showed their intent as they scored yet another penalty to take the lead. Things, however, changed thereafter as the Hogs’ lost a player to a yellow card, thus being forced to play one man down for ten minutes.

Rhinos, however, failed to capitalise on their numerical advantage and they nearly paid as the Hogs won yet another penalty, which Oosthuizen converted to increase the score margin to 12 ÔÇô 7 in favour of Hogs.

The score seemed to galvanise the Rhinos into action as they relentlessly pressed forward seeking an elusive try. Their persistence finally paid off as Keothepile scored a try of which the resultant conversion was buried to give the Rhinos a 14 ÔÇô 12 lead over the Hogs.

The lead seemed to give the very vocal Rhinos fans a voice but their happiness was cut short by Oosthuizen as he converted yet another penalty with less than eight minutes remaining to give the Hogs a 15 ÔÇô 14 advantage over Rhinos.

With time ticking by, both teams got involved in ping pong like kicking match as each kicked the ball forward seeking the elusive game clincher. There was drama in the last seconds of the game as the Hogs gave away a penalty close to the touchline and almost 40 metres from their posts, giving the Rhinos a lifeline to clinch the game.

Ntsebe stepped forward to take the kick and buried it as the final whistle blew to signal the end of the match.

Speaking after the match, the elated Rhinos’ coach, Sean Irish, said the win was the result of long time planning and hard work they put in to build the team.

“We were expecting a very tough match and that’s what we got. But we were prepared for this game and my players did very well,” Irish said. The win means no team has ever successfully defended the rugby league championship.