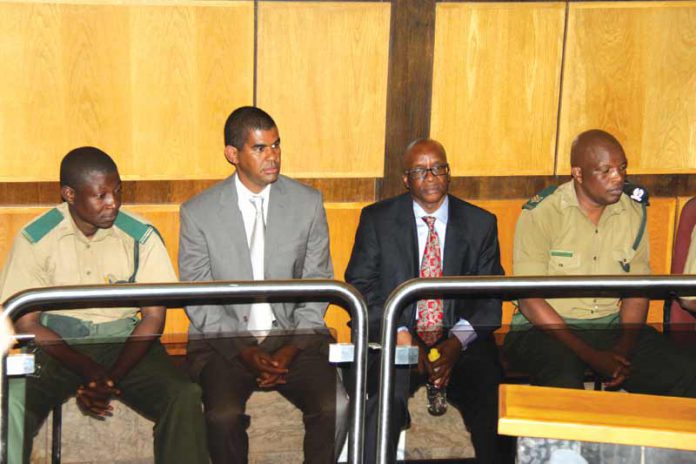 Garvas Nchindo and Joseph Matome convicted, of at least seven felonies, will be remanded in custody until their sentencing on the 27th of October, High Court Judge, Monametsi Gaongalelwe, has ruled.

Escorted by heavy prison security personnel, the two were whisked away to Gaborone Boys Prison until next week Wednesday when they will know their fate before Regional Magistrate Lot Moroka.

Delivering judgement in open court on Monday, Gaongalelwe stated that the court was seized with an unusual application because the application was not a bail during trial or bail pending appeal of the case.

The application before the High Court was launched last week by the two convicts after they were remanded in custody by the magistrate court in Gaborone.

Narrating the genesis of the application, Gaongalelwe said that after their conviction, their attorney, Parks Tafa, a Senior Partner at Collins Newman & Co, told the magistrate court that their clients’ mitigation would be conducted by a Senior Counsel on the 27th of October.

Gaongalelwe said that the magistrate, in deciding to remand the two, was not bound by the views of either the prosecution or defence.

“It should be noted that the magistrate is not bound by any views from either side,” he said, in reference to an understanding reached by prosecution not to contest the accused being offered bail upon conviction.

The High Court Judge said it was difficult for him to comprehend the level of criticism that was directed at Magistrate Moroka.

He said that while the applicants’ attorneys argued that there was gross irregularity because there were two judgements issued, it was clear from the record that there was only one judgement and another was just an unedited version of the said judgement.

“I am at a loss as to why senior attorneys will make such criticism against the magistrate,” he said, referring to Tafa and Khupe who last week questioned the integrity of Moroka’s judgement.

“I am not impressed by the attacks, which are rather emotive as opposed to being of substance,” the judge added.

He said that as soon as the magistrate convicted the accused, the implications were that they lost their right to liberty.

Gaongalelwe further pointed out that although the applicants had a right to approach the High Court, the grounds advanced by the magistrate when remanding the accused could not be completely ignored.

“The grounds of the magistrate cannot be completely ignored….there is a possibility that the magistrate might impose a custodial sentence,” Gaongalelwe stated, as he dismissed the application and further ordered the applicants to pay for the costs of the case.

He said the order pertaining to costs was in view of the manner in which the defence lawyers had approached the court.

Outside the court, photo journalists were falling over each other to get shots, making it impossible for friends and family to catch up with the convicts who were darting away from the press.

Prison officials and security officers at the High Court, however, managed to facilitate a short reunion for the families to get a peep of the two before they were whisked back to prison.
Contacted for comment after the judgement a clearly disappointed Tafa declined to comment.