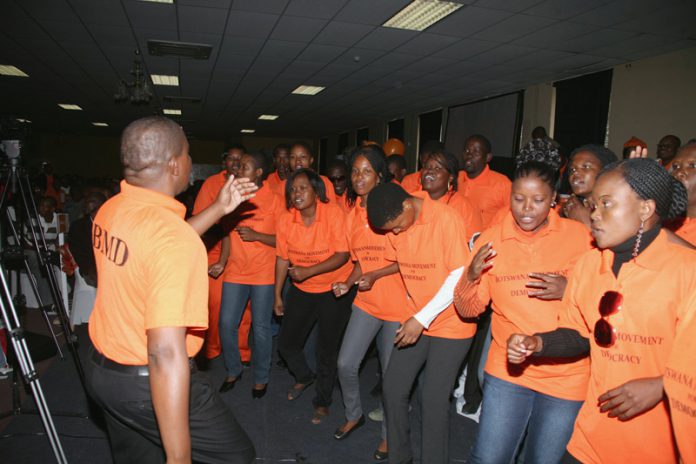 If you are looking for the best Saturday hang out spots for Botswana youths, you can do better than political party conventions. These are no places for sagging baggy pants and exposed belly buttons. Besides “yoo man you are da bomb” does not exactly cut it as politicalspeak.

You would wonder what chubby faces mostly from Botswana Democratic Party (BDP) middle class families, dressed out in “BMD ROCKS” T-shirts could be doing in the hustle and bustle of the opposition Botswana Movement for Democracy (BMD) convention, but there is a good chance that they could be scrambling for membership cards.

Two months after a group of disgruntled BDP members set out on an improbable journey, announcing the formation of a new party, the political passions that they have stirred were finally bursting into light at the party’s convention held on Saturday at Letlhabile Primary School.

The new party has taken a direct line in search of youths who for a long time have been disengaged from the formal political system. The image of university students in sagging baggy pants and exposed belly buttons chanting anti-establishment slogans and waving homemade placards have always been met by an impatient wave of the hand from the political leadership. The youth on the other hand tended to vote in larger numbers on Big Brother eviction nights that on polling day.

For the first time, Botswana seems to have a party with the cool factor and groovy enough to appeal to youngsters. The BMD is pioneering the use of websites to recruit new members marking a leap forward in the evolution of Botswana politics in the information age. Batswana youths can “friend” Gomolemo Motswaledi, Botsalo Ntuane or other BMD leaders on Facebook. This is part of a campaign to shake Botswana’s young middle classes out of their political apathy.

The party has created a group which attracts new members through the Facebook social networking platform. The party membership forms have boxes for members social networking site addresses among them Facebook, Twitter, MySpace and Skype.

Most people who could not attend the Saturday convention were able to view it life on the internet via Skype. New members can join the BMD through the party website. The site provides the members with an opportunity to have a discussion on issues of interest. This is the most interactive use of the internet for politics that Botswana has seen to date.

The youth vote is expected to be the most contested area among Botswana opposition parties in the 2014 general elections. The Botswana National Front (BNF) presidential candidate Duma Boko is campaigning on the ticket of appeal to youths in his contest against Olebile Gaborone, the current party Vice President.

The Botswana Congress Party is hoping that the youthful Dumelang Saleshando will be a hot ticket among Batswana youths come 2014. Saleshando is strongly tipped to replace his father as BCP president.

The Ministry of Health (MoH) last week signed a service level agreement with the Public Procurement and Asset Disposal Board, aimed at ensuring upholding...
Read more
491