Zebras’ stars overlooked by their teams 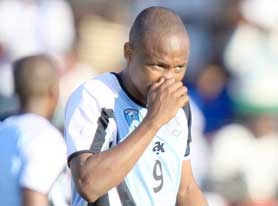 Football is an enjoyable sport once a player commands a regular place and plays week in and out. On the other hand, it can also be cruel at times. The cruelty of it can be attested by Botswana’s top striker, Jerome Ramatlhakwane, and to a certain extent, Phenyo Mongala.

With three goals, Ramatlhakwane is currently the leading goal scorer in the qualifications’ for the 2012 Africa Cup of Nations (AFCON) and is struggling to get game time at his South African Premier League side, Cape Town Santos.

It was worse last season when he did not feature for the team at all. At first, he sustained an injury and when he came back he could not break into the first team. This season one would have thought his coach, Bobbie Solomons, would give him a run looking at how he performs for his country.

What can be taken note of is that Ramatlhakwane scores against so called big African teams.
He scored against Tunisia a few months ago when Botswana shocked the former African champions with a solitary goal.

He continued his streak in Malawi last month when he made sure that Botswana came home with a valuable point.

On Saturday, he again scored an important goal against the 2006 World Cup participants, Togo.
With three goals under his belt it remains to be seen whether he will continue to be sidelined.
Ramatlhakwane, on the other hand, does not want to talk about the issue and refers all enquiries to his agent, Mike Makaab.

He, however, said he is doing all what other players are doing at training but continues to watch from the stands.

An effort to get comments from both Makaab and Solomons were futile as their phones rang unanswered for almost half a day.

Ramatlhakwane joined Santos when it was under Botswana coach David Bright. Things took a dramatic twist when Solomons took over following the resignation of Bright.
Mongala, meanwhile, played for most part of the second round for Pirates last season and did not disappoint. He is now finding it hard to break into the starting line-up, despite the immense talent he has.

He is one of the most skillful and quickest players in Africa.