An artist who sings and writes from the heart and soul 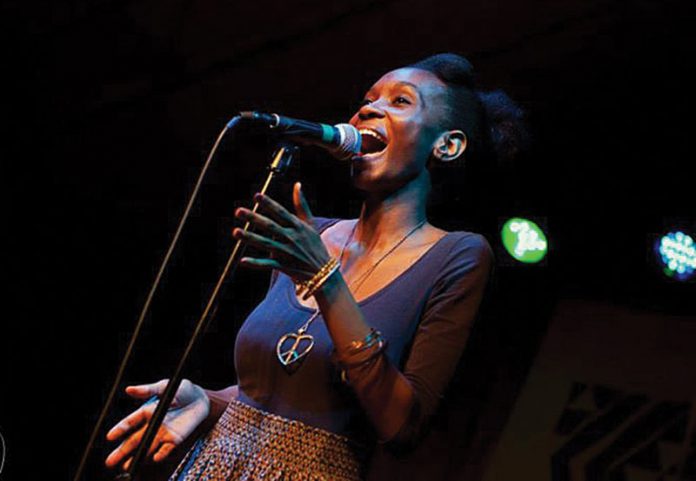 I was invited to a night of music and poetry by Angelous Society a fortnight ago and witnessed 23-year-old Thato Chuma on stage for the first time. She blew me away.

I asked if I could get to know her better. And so subsequently, she invited me to her home to share her story.

What emerges is an inspirational tale of a gifted local artist from very humble beginnings.

“I started singing when I was 14, inspired by records in my father’s living room,” she said.

”My older sister, already a poet, decided to use me as a back up vocalist during her performances at Exodus Live Poetry ÔÇô it’s where it all began.”

Chuma recalls growing up in Extension 4, where her father was the only one in the neighbourhood with a record player.

This would occasionally turn their then tiny living room into a DJ’s booth to the amusement of his parents’ friends. It was in that tiny room where her family’s love of music began.

“My mum on the other hand has always loved telling stories about how she was raised,” Chuma said.

”To a young girl, the stories sounded more fictional than real and that nurtured my love for story writing perhaps even more than she realised at the time.”

Chuma said back then, Gaborone was such a small city that she would run out of places to go. She would while away the hours by recalling and writing the stories her mother told her.

Gradually, Chuma has through the years caught the attention of publications, her poetry and short stories regularly featuring in the Nigerian Saraba Magazine.

“The goal of Saraba Magazine is to create unending voices by encouraging young previously unheard of writers to publish their works. This gives us a platform to showcase our writing. It celebrates literature and its undying nature by showcasing it in the most contemporary way,” said Chuma.

Currently, she is also working with an American publication called Stringe Horizons whose interest is in science fiction. She sees this as a challenge because it is out of her comfort zone.

“To these guys I can only submit poetry that is in alignment with science fiction, unfamiliar territory to me. I will however give it my best shot and see where the path leads me,” she said.

A Marketing Degree graduate from the University of Botswana, Chuma says the varsity years were a challenging period that helped hone her attitude towards life.

“I had my son Leabua at 21 while I was still at varsity. It was during my third year and I had to work extra hard ÔÇô harder than my mates because I was also nursing my son which in itself was a full time job,” she said.

It was probably the most demanding time of her life but through sheer perseverance, and with family support, as well as support from her baby’s father and plenty of self belief, she managed to keep her head above the water.

“Having a son has taught me the real meaning of multi tasking. I even started writing and singing more after he was born and became more focused,” she said.

Chuma plans to do more work for charity by getting more involved with the likes of Angelous Society as a way of giving back to communities.

She sees a bright future for Batswana artists, as she sees a shift in mindsets, with artists recognising the arts as not just a hobby but a career.

“However, I think as artists we still need to take the initiative to find out about what is available out there for our personal development rather than wait for such information to knock on our doors,” she advised.

Chuma said artists must realise that the industry demands them to do a whole lot to prove their worth, and points to the opportunities that lie in the corporate world as a potential sponsor.