Bakgatla Kgosi wants tribe to benefit from its natural resources 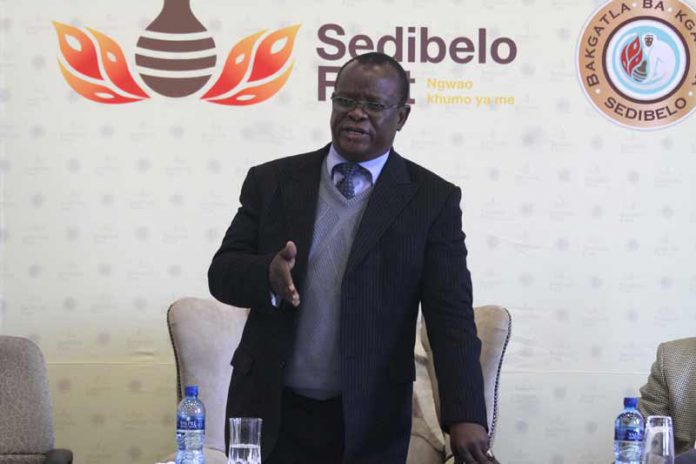 South African-based, Bakgatla-ba-Kgafela Kgosi Nyalala Pilane says it is time for Bakgatla in Moruleng and Botswana to benefit from the natural resources, such as platinum, in the Bakgatla territory.

Addressing journalists in Pilanesburg-Mouruleng, Kgosi Nyalala Pilane stated that as the leader of the Bakgatla tribe, he is concentrating on four economic pillars which are agriculture, mining tourism and manufacturing.

He said he has a vision for large job creation for his tribe and added that he is ready to contribute to the development of the nation. ┬á

He said he has been in and out of the courts of law through trials in South Africa in his mission to assist Bakgatla ba Kgafela to get what belongs to them, such as platinum mine and land.┬á
“We are one nation that is divided by a boundary but we never recognized that boundary,” said Pilane.

Kgosi Nyalala Pilane revealed that he managed to bring negotiations with Anglo America, which resulted in Bakgatla getting R1.5 billion, adding that there were a lot of controversial issues, which were obstacles to the development of his tribe.

Installed in 1996, he said he will continue spearheading bringing back their culture and history, such as initiation schools of bogwera and bojale.┬á According to Kgosi Pilane, the recent developments, such as the new kgotla’s multimillion pula administrations and sports complex have helped raise the profile and image of the tribe.

He stated that the growing interest in the Bakgatla Ba Kgafela mineral resources exploitation by various small, large, local and international mining houses has the potential to act as a motor for wider socio-economic development.

“Post apartheid can influence the mindset of the people,” said Pilane.

According to Pilane, employment and procurement of local goods and services and establishment of trust funds to kick start entrepreneurial and skills development are some of the spinoffs that must come with mining and mineral development.

He said the Bakgatla Ba Kgafela’s intangible heritage is gradually disappearing and it should be preserved so that the youth know where they come from.

Pilane stated that the developments in the village will provide an opportunity for visitors and tourists to have a chance and experience the harmony that exists between Bakgatla-Ba-Kgafela in Botswana and in South Africa. ┬á┬á

“When the storm comes to you, if you are not strong you will be blown away,” said Pilane. ┬á
Meanwhile, the Bakgatla-Ba-Kgafela are planning to celebrate the annual Sedibelo festival, as well as the heritage week, in Moruleng on September 19.