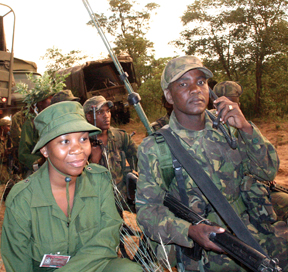 Wednesday morning. I am fighting fit, or at least so I think. I am raring to go, decked out in complete military gear: green overalls, a matching hat and military boots straight from the Botswana Defence Force standard issue office. The iron will to make it to the battlefield and back to base, however, comes from my conviction that Batswana woman can make it in the army.
Many heart-stopping moments later, dusk finally caught up with us. I am convinced that by the time we make it to the battlefront, I would have run out of nails.

I am trudging up a hill in heavy military boots towards the enemy line. Mission: to flush the enemy out, deep into the forest and capture their commander. I can literally see the shadows stretching before my eyes, count every beat of my heart and feel blood rushing through my veins.
Rut-tut-tut-tut! Suddenly, the gunfire of automatic rifles from behind the enemy line pierced the night.

My heart skipped a beat. I gasped for breath, overwhelmed by the smell of gunpowder. I half expected to see bullets whizzing past and stitching a crazy pattern all around me, churning up a riot of sparks, dust and grass. Commotion flared. My squad, until then a queue of green military overalls strung out in a straight line, was suddenly scattered all over the forest as we scurried for cover. “Fire!” bellowed our commander, and all hell broke loose.

Deafening explosions reverberated against the thicket of bushes, blinding flashes of light, more sounds of gunfire and ricochet echoes and more shouts from our commander as he screamed orders, directing us to charge forward.

I said a little prayer, thanking God that I do not have a weak ticker; otherwise I would have died of a heart attack.

A military conflict? A guerilla warfare shooting scene? No, it’s Exercise Matsubutsubu, a mock battle between teams of journalists and the Botswana Defence Force soldiers.

I was among 21 journalists who last week traded their seats in the newsroom for a place on the battlefront – to get a feel of life on the front.
About 8.30 Wednesday morning we changed into green overalls and boarded a BDF bus from Sir Seretse Khama Barracks, a starry eyed lot. We were nursing romantic notions about war, gleaned from Rambo and Top Gun movies watched from the comfort of our living rooms with bowls of popcorn.

We arrived in Lentsweletau an hour later and boarded the two ACMAT army trucks that were awaiting us still bubbling with excitement and a sense of adventure. We drove straight to the Joint Force Headquarters (JFHQ) which was led by General Masisi. This is where divisions report progress everyday.

We received our first briefing from Major General Pius Mokgware. For a scribe, whose idea of briefing means being made to memorize questions for an interview, the army briefing sounded like a reading of death rites.

The briefing sessions went something like: “There is going to be a lot of noise from firing and please those who have heart problems should let us know.” Tough stuff.

The exercise was made up of three warring imaginary countries: Orapaland, Ghanziland and Jwanengland. We were supposed to be defending Jwanengland and the enemy was Orapaland.

“This evening you are going to capture the enemy in Kgomodiatshaba where he is in isolation. This means you are going into battle with our troops,” stated Mokgware.

Smoking was prohibited. Women were advised to stash away their jewelry and we were all advised not to chew gum because it would dehydrate us. A useful piece of information, considering that we were expected to survive on 700 ml of water for the whole day. We immediately surmised that taking a bath was out of the question.

Headquarters is made up of the communication area, fire department, Civil and Military Cooperation (CIMIC), the Intelligence and the ground forces.

This operation area is the hub of the campaign.

This is where the army big brains huddle around a table to plan and analyze strategies. They depend on information gathered by the intelligence unit. In a real war situation, the intelligence could be the difference between marching back to base in triumph and being carried back in a body bag.
Then there is the Air base. This is where air assaults are coordinated and fuel is stored. A backbone of the fighting force, military police officers guard it zealously with sniffer dogs straining from leashes. The air-base also has a mechanical engineering area and a clinic, where broken down vehicles and war casualties come home.

We had our lunch at headquarters before boarding our AGMAT trucks to join the attacking battalion in Bodungwane, about 50km from Lentsweletau.
As it turned out, if it were a real war situation we would never have made it to Bodungwane alive. We would have died in a hail of bullets from two army aircrafts that suddenly appeared from nowhere and hovered overhead.

Major Malefo Ntsayakgosi who was our care-taker immediately ordered the vehicles to stop. “If we were in real war, we would be dead by now. The airplanes would have peppered us with bullets,” said Ntsayakgosi before ordering the convoy on.
We arrived at Bodungwane where we were welcomed by Brigadier Olekanye Mabengane commonly known as the ‘The Lion of the North’. He briefed us on what was going to happen that night. After the briefing, we took time to unwind and mingle with the troops. They warned us about the “deafening explosions” and the “blinding lights” from the explosions. “That can unsettle you and you might end up getting lost in the confusion. Should you get lost don’t panic, just stay where you are. We will come rescue you,” said Ntsayakgosi.
About 1830 hours we boarded the trucks for Kgomodiatshaba to capture the enemy and reclaim our territory. On our way to Kgomodiatshaba we met more troops. The gathering dark cloud added to the ominous sense that something was about to happen.

It was now getting dark and every shadow resembled an enemy ready to pull the trigger.
We came across a convoy of trucks and Land Rovers. We thought it was our battalion only to find out they were rival troops who were going to capture Mokgenene.

About 1930 hours we caught up with our troops who were already assembled. There were about 100 men with their trucks beside the road. They all had AK47s slung over their shoulders. Some had grenades. We split into two battalions. I was in the Delta Force. This meant that I was in the second attacking column.

Our Commander ordered us to walk in silence. We trudged through a terrain of small dunes in heavy military boots and had to keep up with the pace nimble footed trained soldiers. We walked and walked and walked. Still there was nothing, just and expanse of dunes and shrubs. After half an hour a pair of dim lights appeared in the dark.

“Light action!” whispered the commander. The soldier behind whispered to me that it meant we should get out of the way. We kept walking and got to a terrain of gravel stones. I was all sweaty and sticky. It began to drizzle. I prayed that it should rain. Suddenly “cover up! Cover up!” whispered the commander. In no time everyone scurried for cover. After a few minutes that seemed like forever we were ordered to continue with the journey.

“Remember we have to walk in silence so as not to alert the enemy,” our commander cautioned us.
A few meters away, we spotted another platoon that had mounted a road block and pitched a tent nearby. Our commander ordered us to detour through a bush of thorny shrubs. Our ears were strained for any strange noise and our eyes scanned the ground for snakes and other dangerous creepy crawlies. We were busy cursing at the thorn bushes which never stopped pinching us when we heard the first gun shot. My heart skipped a beat. We continued walking deep into the forest.

The heavy boots had slowed me down and the 700ml bottle of water felt like a bag of stones. After a few minutes we came across another platoon sprawled on the ground and blended with the bushy area in their camouflage uniform. We slowed our pace. I was sure my legs could not carry me any further. I was pleasantly surprised when one of our platoon members whispered that we had finally arrived. However, it was now our turn to move to the battle front. We waited for the commander to give us an order to attack.

Finally the order came. We charged forward. As we began to climb the hill where our enemies were, the firing began from behind the enemy line. We were no longer in lines but scattered all over the forest. “Fire!” bellowed our commander.

The whole battle took 30-45 minutes. We had no casualties but failed to capture the commander of the enemy force. This meant we had not accomplished the mission.

All the journalists were so tired that they could not walk back to base. Ntsayakgosi lead us to where our trucks were packed. After boarding the trucks, tired as I was, I just dozed off and woke up at 0400 hours in Lentsweletau.

The Ministry of Health (MoH) last week signed a service level agreement with the Public Procurement and Asset Disposal Board, aimed at ensuring upholding...
Read more
280