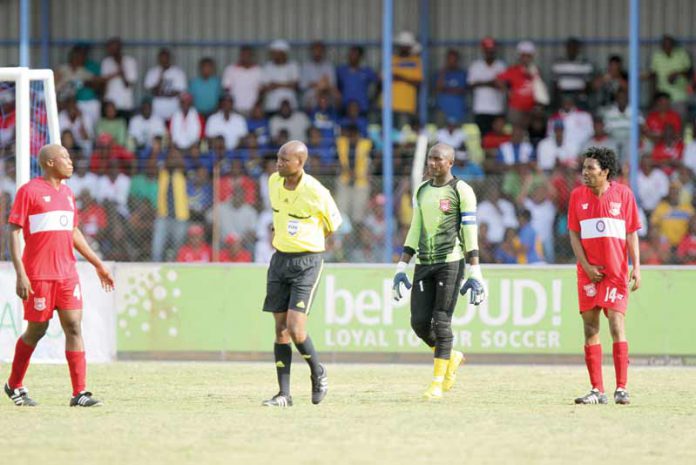 When Gaborone United (GU) visit BDF XI in a crucial be MOBILE Premier League tie at SSKB Stadium in Mogoditshane this afternoon, they will be without their key defender, Tumisang Sekanonyana, who was sent off during their derby against Township Rollers at UB Stadium last weekend. Sekanonyana was dismissed by referee Kutlwano Leso in the 23rd minute for elbowing Rollers’ Mogakolodi ‘Tsotso’ Ngele in an off-the-ball incident.

The red card did not win referee Leso many friends, especially from the GU camp as they claimed he was favouring their opponents.

But TV replays this week have shown that the referee took a brilliant decision as Sekanonyana’s action was brutal. It was GU’s seventh red card of the season, which makes the Reds the most undisciplined side in the league.

While their professionalism off the pitch has won GU many accolades, it is on the field where many people are wondering what the problem could be. Alphonse Modisaotsile, Mandla Mgadla, Noah Maposa, Dylan Chivandire, head coach Elvis Chiweshe and former assistant coach, Chris Rabalago, have all been sent off this season.

GU secretary Herbert Letsebe said that they will sit down with the technical team and study Sekanonyana’s dismissal. He pointed out that if they find that Sekanonyana’s red card was uncalled for, they will act accordingly.

“We do not condone unbecoming behaviour from our players. If Butcher was wrong, we’ll leave it to the technical team to make a recommendation. At first, we thought it was not a red card and the referee had been crucified for nothing,” he said.

Letsebe said that after they picked so many red cards in their opening games of the current season, they organized a workshop for their players at the University of Botswana.

“We once called the referees to teach the boys about the laws of the game. It was a comprehensive workshop and there was an improvement after that. We always encourage the technical team to remind our players not to pick unwanted red cards,” said Letsebe.