Khama to donate 150 cattle to Malawi 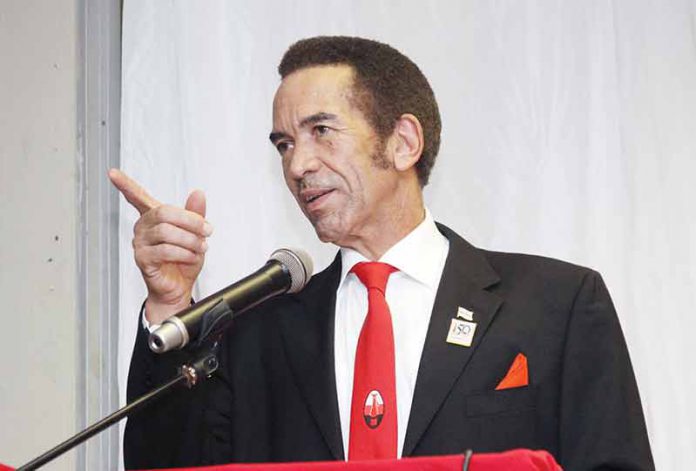 President Ian Khama is expected to take his poverty eradication campaign beyond the border when he donates 150 cattle to Malawi at a date to be announced.

Khama reportedly announced a donation of 150 cows to Malawi for the newly launched ‘A Cow A Family’ project, which has so far been rolled out in the South and Central region during a bilateral talks between him and Malawi President Joyce Banda.

The ‘A Cow A Family’ project, which is a presidential initiative, was launched recently by that country’s Vice-President, Khumbo Kachali, as part of its practical way of reducing poverty among rural households in Malawi.

Malawi Presidential spokesperson, Steven Nhlane, said in press statement that Botswana has also offered to give Malawi a soft loan of $10 million towards agriculture and health sectors, the State House Press Office announced on Monday. Nhlane said the loan would also help the country improve the country’s fuel situation.

“The commitments were made during bilateral talks between Joyce Banda and her Botswana counterpart Ian Khama and their officials in Gaborone. The two governments, which have a Joint Permanent Commission of Cooperation [JPCC], also agreed to fast-track private sector engagement and establish an investment and promotion protection agreement to expedite provision of the credit lines,” reads the statement.

The governments of Malawi and Botswana have committed to sharing resources and expertise in a number of areas.

Botswana, reads the statement, also committed to sharing experiences and expertise with Malawi by providing training to Malawi in areas of tourism, wildlife and mining.

Banda, who was on a two-day State visit in Botswana, jointly with Khama, opened a Poverty Eradication Initiative Symposium Chanoga last week.

Newly appointed Presidential spokesperson, Masego Ramakgati, had promised to comment on the announcement of the donations of 150 cows by President Khama but he had not done so at the time of going to press.

On the issue of loan agreement, Permanent Secretary in the Ministry of Finance and Development, Solomon Sekwakwa explained in a press statement that in response to the request from the Government of Malawi for assistance, the Government of Botswana is considering extending a soft loan to the Government of Malawi amounting to the Pula equivalent of US$10 million.
This is a loan, Sekwakwa added, which is to be repaid over a period of 10 years with interest and not a donation or a gift.

“The intention is to help a fellow low income African country which is in a similar position as Botswana was at the time of its Independence. It is important to note that the proceeds of the Loan will be used to purchase goods from Botswana. The goods to be purchased cover, among others, livestock vaccines, fuel and cattle. The Loan Agreement is yet to be negotiated by the two countries,” reads the statement.

The statement also states that a Line of Credit is also being considered to finance Joint Venture investments by Botswana businesses in Malawi covering the agricultural, trade and tourism sectors. This will benefit both local and Malawi business enterprises and facilitate expansion of trade and thereby grow economies of both countries. The funding for the Line of Credit will be negotiated with the local commercial banks.