Masitaoka devour own players over money 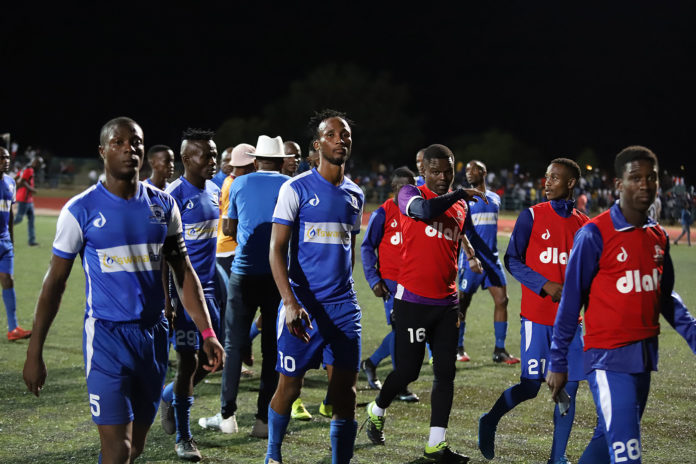 The Botswana Premier League (BPL) Masitaoka football club is in collision course with its own players over the COVID19 relief fund monies.

According to sources, the team has requested that all its players remit their three months’ worth relief funds they got from the government into the team’s coffers.

It is alleged that the message to the players was relayed through the team’s Technical Director Nelson Olebile.

Olebile is said to have informed the players to cash out the P4 500 they received and hand them over to him to deposit it into the Masitaoka Enterprise funds.

Primer league players were to be assisted with up to P2 500 while the first division players were each to get P1 500 for three months.

“we asked if we can transfer the money directly from our bank accounts but he refused and said we should all cash the money had give him so that he can go and deposit the money,” one player informed this publication.

The player, who commented on condition of anonymity showed this publication a trail of WhatsApp messages from the team’s Technical Director as proof.

“Good afternoon gents as I mentioned last early this week that the money will come directly to your accounts so therefore you are requested to cash the money and give it back to Masitaoka enterprise with immediate effect and fail to do that action will be taken against you as that has been long discussed that the money belongs to the company not us. I thank you and hope that everyone will adhere to the this msg” one message reads.

Another message which seemingly came from the team’s hierarchy and is titled ‘Players’ refunds from MYSC’ informs the Technical Director to ‘inform them immediately to urgently return the money to Masitaoka Enterprises as earlier indicated.’

The demand of the management however seems to be hitting a deaf ear among players as one message allegedly from Olebile indicated that only six players had remitted the monies ‘while the rest are quiet.’

Masitaoka’s Communications and Marketing officer, Godfrey Ratlhaga confirmed to this publication that the team has indeed asked of its players to pay their relief funds back into the team’s accounts.

“It is a matter of principle you cannot get relief when you are getting full salary,” Ratlhaga said.

The Masitaoka communications officer went on to point out that they had informed the BFA that they would be paying players full salaries and the team ‘will get what they are supposed to get from them once the monies are credited into their accounts.’

Ratlhaga said they could not get the money direct from the ministry because it was agreed that the money will be paid into players accounts. He says all players were paid full salaries for the months of April, May and June.

Commenting on the matter, Footballers’ Union Botswana (FUB) secretary general, Kgosana Masaseng, explained that they knew about the issue after being approached by Olebile and the team captain.

“We advised that since the money is relief it will be advisable if players can take the money back to the team since they have been paid well,” Masaseng explained.

According to Masaseng, ‘FUB told players that it is a relief fund and not a bonous,’ thus ‘players should not risk the good relationship they have with the management by becoming greedy.’

“We asked them not to risk their chances of always getting paid full salaries with just P4 500 three months relief money,” he explained.

He further elucidated that if the team has stretched itself during the difficult times and pay full salaries there is not need for players to be selfish.

Masaseng advised the team that all players should be allowed to transfer the money into the team’s account so that the money can be traced if need be.

“cashing and paying or giving an official hard cash is not right and can breed conflicts. It will also be difficult to prove if players have paid or an official has received something,” he advised.