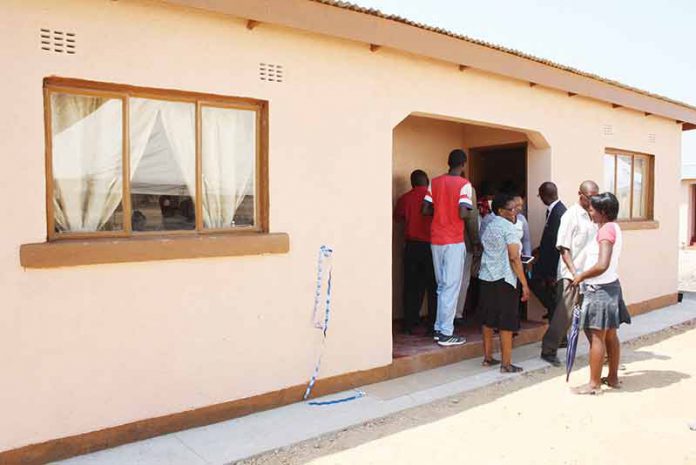 As part of its Corporate Social Responsibility (CSR), Tati Nickel Mining Company (TNMC) last week Friday donated a house to Zizo Thomas, a destitute in Matshelagabedi village in the North East District.
Giving the background of the mine’s CSR projects, the Acting Managing Director of TNMC, Ditiro Lentswe said that in 2010 TNMC introduced the Managing Director (MD)’s sponsored walk with the objective of raising funds to assist in small projects at villages close to the mine.

“The charity walk has been growing significantly from a net of P100 000 on its inception in 2010 to a net of P350 000 in 2014. I appreciate the passion and commitment of Tati Nickel employees towards making our charity walk a success. Through a concept of “donate a day” employees voluntarily donated leave days and the response continued to grow after introducing it in 2012. The corporate world has also been very supportive through its sponsorship and we will continue to need their support in future for the charity event to grow and be successful,” said Lentswe.

He said since 2012, the funds raised from the charity walk have been invested in the construction of houses for families living close to the mine. He said in 2012, one house was built at Matshelagabedi and the other one was built in Matsiloje. Lentswe also said that proceeds from the 2013 charity walk have been used to construct one house at Matopi and two at Matshelagabedi. He added that since 2014, proceeds built two houses, one in Matsiloje and the one that was handed last week.

“To date a total of seven houses have been built and handed over to the recipients. We must bring dignity to those living close to the mine first before we go out because “Charity begins at home,” Lentswe said.
Touching on the donation, he said the house that Thomas was receiving is a life time gift and will restore dignity to the family. He said habitable shelter is a critical necessity for each and every human being and without it one can be disadvantaged from having a decent place they can call home.

“Habitable accommodation for a family gives one an innate right to be valued by the society and indeed all of us must be worthy of honour. Projects such as this are very necessary for emphasising the importance of a decent lifestyle and it is a gesture that our company is not only concerned about its employees, but even the community that it does business in,” he said.

Giving a keynote address, The North East District Commissioner, Rapetse Mathumo lauded TNMC for its commitment to Corporate Social Responsibility (CSR) and making a difference in the lives of the underprivileged.

“This initiative is in line with the Presidential Housing Appeal which was initiated in 2008 by his Excellency President Ian Khama. Under the Presidential Housing Appeal, 535 houses have already been built for the needy and 77 houses are currently under construction. I wish to commend Tati Nickel Mine for continuing to heed the call by his Excellency to help build houses for the needy,” he said.
Mathumo also said that the charity gesture by TNMC will also complement the country’s efforts of achieving the pillars of vision 2016 especially the pillar of a “Compassionate, Just and Caring nation,”
He urged the beneficiary to take care of the property so that it can even benefit her children for many coming years.

For her part, the beneficiary, Zizo Thomas, who is blind, thanked TNMC, the social workers and the village authorities for making her dream come true.

“I did not have a roof over my head and I lived with my extended family in Sekukwe village where we shared a tiny house. This is a dream come true for me. I want to thank Tati Nickel Mine and all those who helped make this dream turn into reality. Above all I want to thank God for answering my prayers,” she said.