Khama restricts his understanding of ‘discipline’ to army 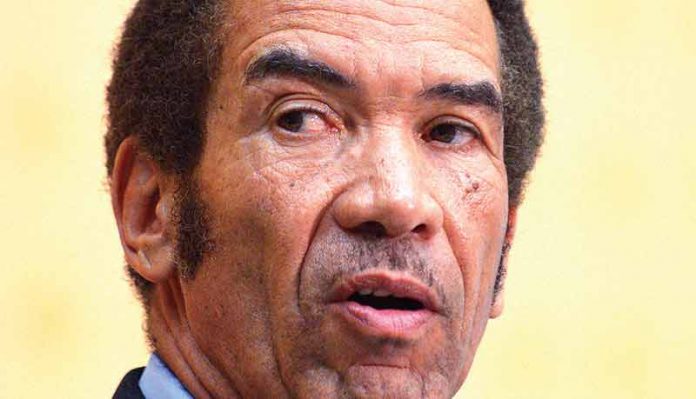 At a Wednesday memorial service at the University of Botswana, a young man referred to late president Sir Ketumile Masire as “homeboy” and revealed that he was so close to him that he could barge into his bedroom without knocking on the door.

President Ian Khama recoiled with horror when he heard this testimony and expressed his disapproval the following morning when he spoke at Masire’s funeral in Kanye. He asked, in jest but to make a substantive point, that the Masire family should surrender the young man to him so that he can take him through basic army training to teach him discipline. Discipline is a theme that Khama harps on every opportunity he gets. On the very day that he became president, Khama stressed the importance of discipline, announcing it as one of the four (later five) elements of his roadmap. While he subsequently ditched the roadmap, Khama still clings to the value of discipline in character building.

The problem though is that he understands discipline within a very narrow context of using punishment to correct disobedience. In the army, where he practically grew up and cut his teeth in the professional world, being disciplined means obeying orders. The higher order of discipline ÔÇô which Khama never speaks about – is self-control. This type of discipline relies more on use of brains than brawn. Financial discipline is one form of this type of discipline.

The president’s beliefs about army discipline was the obvious motivation for the Youth Empowerment Scheme (YES) through which young people were sent to a basic training army camp in Pandamatenga. Interestingly, while YES was supposed to instill discipline in young people enrolled in it, some army instructors lacked the discipline to control their lust and allegedly slept with young women enrolled in the scheme. The indiscipline of the instructors also took the form of extreme physical abuse. A youth who enrolled for YES says that upon arrival at Pandamatenga, muscular soldiers got on the bus she and other youths had travelled by from Gaborone. The soldiers falsely accusing them of having insulted the driver along the way and started assaulting everyone on the bus.

Judging by the rowdy conduct of some young soldiers at bars (especially those around barracks), even the discipline they learn in the army doesn’t seem to be resilient enough to be transferred to other environments when self-discipline is required.