The Pan experience …and a ‘rendezvous’ with the meerkats 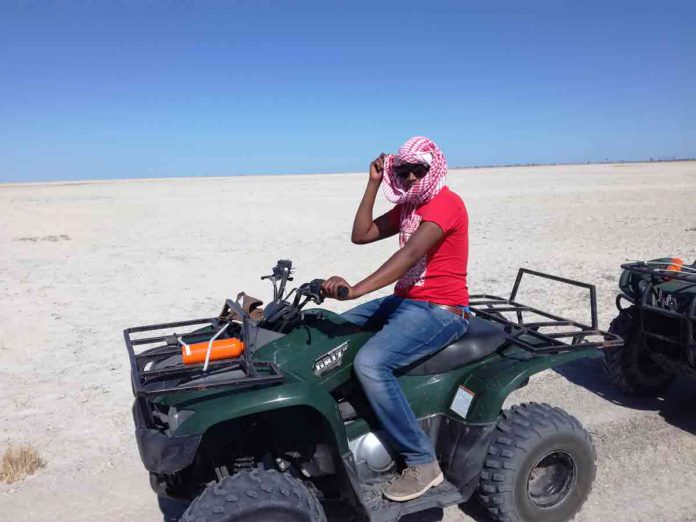 “I have often given our visitors an opportunity to experience at least 15 minutes of the isolation and silence of the sparse landscape in order to get in touch with their inner voice. Some of them, especially New Yorkers, have come back to me crying,” Bart Vandpeitte.

If there was one thing that particularly caught my attention about the impending two weeklong visits to some of Botswana’s best tourism destinations, it was a visit to the Okavango Delta.  The Botswana Tourism Organisation (BTO) and Sunday Standard had given me an opportunity to tick a box on my long bucket list. As the itinerary had indicated, we would have to begin our journey at the Makgadikgadi Pans. I could not wait to get it over with. ‘A couple of days won’t hurt’, I thought to myself.

But as I would soon discover, nothing could have prepared me for the breathtaking experiences the Pans had in store for me.  We had barely checked in at Camp Kalahari following our 45 minute chartered flight from Maun when the resident guide, Bart, proposed an afternoon game drive. With two masters degrees in both zoology and soil science to add to his four decades of experience , calling him a guide just seems to take something away from the conservation encyclopaedia the man really  is.  I am in the company of BTO’s Samuel Lephalo, RB2 Station Manager Sakaeyo Jannie, Gabz FM’s Paphani Masalila, Moagi Madisa from Botswana Unplugged, and Lonely Planet’s Mathew Phillips . We would soon be joined by Kate Wills of ‘The Guardian’ (UK) and Emma Ledger, The Independent (UK).

Bart keeps turning off the engine at special sightings, taking time to explain to his guests the various aspects of the concession. With almost five years working for Camp Kalahari, Bart knows the concession like the back of his hand. He speaks about the various wildlife migrations and the nutritional value of the grass due to the salty soil. He speaks about the plus 75,000 herds of zebra that show up during rainy seasons and their 365 days of pregnancy. “If you were to be reincarnated do not come back as a female zebras. They spend their entire lives pregnant, with only a couple of weeks in between,” Bart says.  He also explains the relationship between elephants and the palm trees in the concession. “Americans often ask me how the palm trees ended up here and I tell them it is because of the elephants.” He says after eating the palms the digestion helps to break the outer hard layer making it easy for the seed to germinate once it drops down. The pans boast a wide variety of other wildlife from wildebeest, snake eagles, mongooses, jackals, lions, snake eagles, impala, duiker, etc. But a game drive to the pans would not be complete without paying a visit to the most exciting inhabitants of the concession; the meerkats. The animals have habituated to people, even using visitors as vantage points to look out for predators. These fascinating members of the mongoose family live in large groups, taking turns to look for food, keeping an eye out for predators by standing on their hind legs,  and helping each other to take care of their young ones.  We also had an opportunity to visit a clan of the Basarwa in the area to learn one or two things about their way of life. One of the highlights of activities at the pans is of course the quad bike ride across the plains.

We visited the archaeological sites of Stone Age tools and got to touch and feel some of the fossils floating on the surface.

Riding across the pans with absolutely nothing to see in the horizon but the mirage is an incredibly amazing feeling. Bart says some people who come here and get the opportunity to listen to the silence get extremely emotional. He says this is even more so for those from big cities like New York. Camp Kalahari is situated on the edge of the famous salt pans and adjacent to the Makgadikgadi National Park. The camp offers a refreshing environment with its uniquely luxurious isolated tents that feature en-suite alfresco bathrooms with a flush toilet and a shower. There is no network coverage hence no connection to the outside world. The central complex of the camp consists of a thatched library, a comfortable lounge and dining area and a plunge pool to cool off the unforgiving temperatures during the summer.