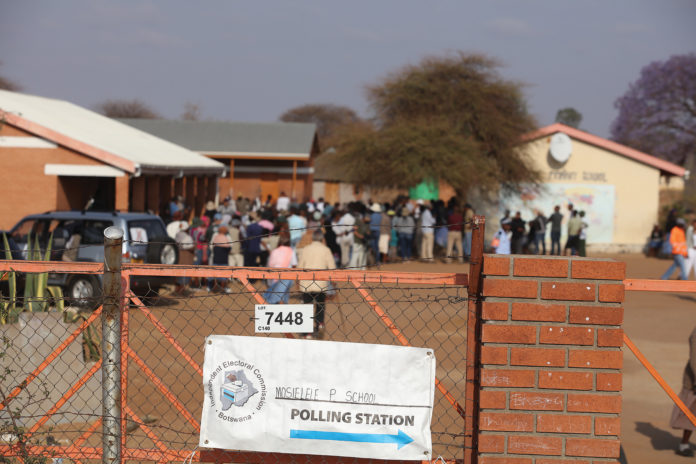 In declaring the outcome of Botswana general election false because it was “rigged”, a British-South African man called Paul O’Sullivan has himself offered a false reason.

South African media quotes O’Sullivan as saying that “a decision was taken to not use inedible ink pens which enabled voters to cheat.” He mentioned this in the context of “red flags” which pointed to government interference in the elections.

“These pens have been in use at every single election since 1966,” said O’Sullivan when addressing a press conference in Johannesburg, alongside the president of the Umbrella for Democratic Change, Duma Boko. “Somewhere, somehow, a decision was taken in late 2018 or early 2019 – we haven’t been able to establish who took that decision but a decision was taken – that the electoral pen will not be used in 2019. That’s a red flag.”

That statement is actually false on two levels. Firstly, Botswana has never used electoral pens which O’Sullivan says are used to “put a mark on your finger or your thumb.” What it used instead was election ink – also called indelible ink or electoral stain. This semi-permanent ink was applied to the forefinger of voters during elections in order to prevent double voting. The Independent Electoral Commission (IEC) used dipping bottles, not marker pens.

Secondly, the decision to not use electoral ink was taken not in late 2018 or early 2019 but after the 2004 general election. The ink was not used in the 2009 general election. Despite its deceptive name, the IEC is actually controlled from the Office of the President and the decision to not use electoral ink in the 2009 general election was taken during the administration of President Ian Khama. Ironically, the latter has associated himself with the Boko/O’Sullivan campaign and if anyone has to bear responsibility for the non-use of election ink, it would be Khama himself.

Through an organisation called Forensics for Justice, O’Sullivan has produced a report in which he alleges that the Botswana Democratic Party (BDP) rigged the 2019 general election. Such allegations will now be legally tested by three judge panels in Gaborone, Lobatse and Francistown. O’Sullivan’s report also makes false claim – that “all predictions pointed to a hung parliament or a coalition.” In actual fact, most predictions did but one (by Afrobarometer) pointed to a BDP landslide.

To the extent it attempts political analysis, O’Sullivan’s report doesn’t factor in the unusually strong anti-Khama sentiment that had built up around election time. The report, which was prepared by O’Sullivan’s assistant, attorney Sarah Jane Trent, doesn’t state the source but shows a map that has UDC winning 31 seats, BDP 22, Botswana Patriotic Front 3 and Alliance for Progressives one seat. That information gap notwithstanding, there was real possibility of UDC winning but it is widely believed that the party’s association with Khama loused up such possibility. An over-bearing Vice President, Khama became downright dictatorial when he became president and many didn’t relish the idea of him returning to power via UDC. The anti-Khama sentiment was very strong in the labour movement – which helped the UDC secure 19 seats in the 2014 general election by asking its members to vote for the party. Union members are a significant voter constituency. One of the movement’s leaders, Johnson Motshwarakgole, recently told The Voice in a video that went viral that public sector unions were very uncomfortable with the UDC’s association with Khama. To that end, they started an underground campaign to solicit votes for the ruling party.

Unknown in Botswana until late last month, O’Sullivan was born in Ireland and naturalized as a South African. He is a quite colourful character. Two years ago, he appeared before the Kempton Park Magistrate’s Court on an immigration-related matter. South Africa’s Mail & Guardian reports that between March 2015 and February 2016, O’Sullivan exited and entered the country on his Irish passport. The state’s case was that this contravened the South African Citizenship Act. At the time, O’Sullivan and Trent were facing charges for allegedly impersonating an Independent Police Investigative Directorate officer during their investigation into acting police commissioner Lieutenant-General Khomotso Phahlane. Individually, O’Sullivan faced some other charges: fraud, extortion, kidnapping and intimidation. In his defence, he is reported to have stated that the complainants in all of the cases were from people he had previously investigated and that the state was trying to jail him.

One of the people that O’Sullivan has investigated is Zunaid Moti, a South African multi-millionaire who heads the Moti Group and has been revealed as the chief financier of the UDC campaign ahead of the 2019 general election. This investigation was in 2012 and one of the text messages that O’Sullivan sent Moti read: “Go down to Dischem and stock up on Vaseline. Twenty years is a very long time, old chap.” He also called Moti “a gangster and a thug.” In 2011, a South African businessman called Naeem Cassim survived a drive-by shooting near Broederstroom in North West Province. Cassim hired O-Sullivan to investigate the attempts on his life. The charges were later withdrawn and Moti indicated he would pursue a ”seven-figure” civil claim against O’Sullivan for defamation of character. A South African online publication [www.iol.co.za] writes that Moti also filed charges of intimidation against O’Sullivan, alleging he had stood outside his Sandton offices and made a cut throat gesture, that he had followed Moti’s neighbour through traffic, and that he had called some of his staff “kaffirs”.

“I have a footage of him outside the offices here. My neighbour drives the same car as me, so he followed the man through traffic thinking it was me. “He also came to my parents’ home and made threats there,” Moti is quoted as saying.

As zimonline reports, Moti and O’Sullivan later made up well enough for the later to get on the former’s payroll: “O’Sullivan will now assist the Moti Group to expand into Africa.”

From a non-legal, common-sense perspective, the rigging claims are weakened by this clear conflict of interest because both O’Sullivan and UDC are on the payroll of the Moti Group. The rigging allegations bode ill for Botswana’s future and it is important that the truth should come out. This conflict of interest doesn’t help the process in any way.

Those who appreciate this issue from a Pan-Africanist perspective would have discerned and be deeply troubled by the neo-colonial and racial dimensions of a forensic analysis operation set up by a white British man, which detects election fraud and corruption in black-governed African countries. Forensics for Justice has investigated corruption in other African countries like Kenya and Liberia. In O’Sullivan’s own birthplace, the Metropolitan Police Service Special Enquiry Team has received and is investigating two allegations of electoral fraud and malpractice in relation to the 2019 general election. It is alleged that Conservative Party figures offered seats in the House of Lords to Brexit Party election candidates to persuade them to stand down. In the United States, successive Republican administrations, like the current one, have sought to disenfranchise black voters. There is no indication that Forensics for Justice is doing any investigations in the west.